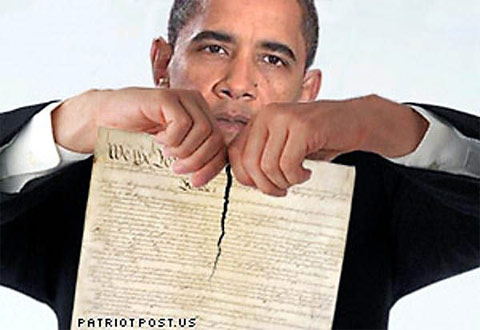 On Monday the U.S. government took steps to seize the US-based assets of Russian lawmakers and anyone else that the US government deemed complicit in supporting the Crimean secession movement.

We’ve seen the U.S. government do this in countless cases surrounding drug and financial crimes, and sometimes even against foreign leaders like Saddam Hussein and Manuel Noriega.

What makes this particular instance so unprecedented and terrifying is that President Obama went so far as to issue a new Executive Order to give himself the authorization to do so, because the laws of the United States are such that our government is not allowed to simply take someone’s bank assets, home or business without due process.

The new Executive Order doesn’t just apply to just Russians or foreigners. It gets blanket coverage, so even American citizens could now face asset forfeiture if their actions are deemed to be “contributing to the situation in the Ukraine.”

Via: The Ron Paul Institute

Like most Executive Orders and government legalese, the definitions for why an individual would have their assets seized under this directive are extremely broad and they could, for all intents and purposes, be used against anyone who supports Russian interests, or simply argues against those of the United States.

You can read the full Executive Order at the White House web site. The key points are noted below:

All property and interests in property that are in the United States, that hereafter come within the United States, or that are or hereafter come within the possession or control of any United States person (including any foreign branch) of the following persons are blocked and may not be transferred, paid, exported, withdrawn, or otherwise dealt in: any person determined by the Secretary of the Treasury, in consultation with the Secretary of State:

(i) to be responsible for or complicit in, or to have engaged in, directly or indirectly, any of the following:

(A) actions or policies that undermine democratic processes or institutions in Ukraine;

(B) actions or policies that threaten the peace, security, stability, sovereignty, or territorial integrity of Ukraine; or

This new Executive Order has crossed a very dangerous line. It’s one that turns the notions of property rights and due process upside down by effectively bypassing the U.S. Constitution.

While we’re sure the President and his staff would argue that such a law would never be used against Americans who are protected by free speech, the fact is that the Executive Branch now believes it has the self-manifested authority to target any individual who engages in activities that undermine US interests abroad or at home.

If a President of the United States believes he has the authority to make it illegal for you to provide support to Russia by way of political commentary, charitable donations or other methods, could he also use similar directives to push forward other agendas?

The next Executive Order could come in the form of restrictions on firearms advocacy or target those who speak out against policies like government mandated health care. All it would take is the declaration of a national emergency and they can essentially do as they please.

Is it prudent to give a single person the ability to force such actions down the throats of the American people without Congressional oversight or Judicial review?

Contributed by Mac Slavo of www.SHTFplan.com.

When it hits the fan, don’t say we didn’t warn you. Mac Slavo is the editor of SHTFplan.com, a resource hub for alternative news, contrarian commentary and strategies that you can take to protect yourself from the coming global paradigm shift.