Never Seen Before On The Sun, Video First Sighting Of How A CME Forms; Earth Directed CME, Ring-Shaped Prominence Erupts from Sun

Sun Sends CME Towards Earth
An Earth-directed coronal mass ejection (CME) on Jan. 31, 2013 was accompanied by a large prominence eruption best visible in light with a wavelength of 304 angstroms. NASA’s Solar Dynamics Observatory captured this footage from 10 p.m. EST on Jan. 30, 2013, to 4 a.m. the next morning. In this video, the imaging cadence is one frame every 36 seconds. 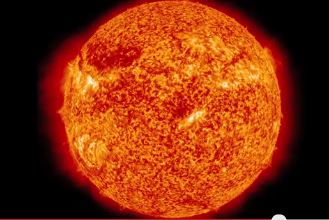 Experimental NASA research models, based on observations from the Solar Terrestrial Relations Observatory (STEREO) and ESA/NASA’s Solar and Heliospheric Observatory, show that the CME left the sun at speeds of around 575 miles per second, which is a fairly typical speed for CMEs. Historically, CMEs at this speed are mild.

Not to be confused with a solar flare, a CME is a solar phenomenon that can send solar particles into space and reach Earth one to three days later. 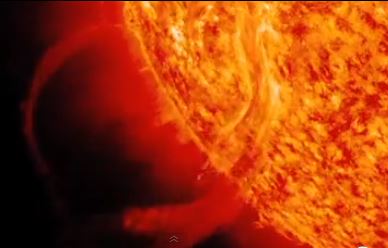 Earth-directed CMEs can cause a space weather phenomenon called a geomagnetic storm, which occurs when they connect with the outside of the Earth’s magnetic envelope, the magnetosphere, for an extended period of time. In the past, CME’s such as this have caused auroras near the poles but didn’t disrupt electrical systems on Earth or interfere with GPS or satellite-based communications systems.

The image on the left shows a series of magnetic loops on the sun, as captured by NASA’s Solar Dynamics Observatory on July 18, 2012. The image on the right has been processed to highlight the edges of each loop and make the structure more clear. A series of loops such as this is known as a flux rope, and these lie at the heart of eruptions on the sun known as coronal mass ejections (CMEs.) This is the first time scientists were able to discern the timing of a flux rope’s formation.

How a CME Forms

On July 18, 2012, a fairly small explosion of light burst off the lower right limb of the sun. Such flares often come with an associated eruption of solar material, known as a coronal mass ejection or CME — but this one did not. Something interesting did happen, however. Magnetic field lines in this area of the sun’s atmosphere, the corona, began to twist and kink, generating the hottest solar material — a charged gas called plasma — to trace out the newly-formed slinky shape.

The plasma glowed brightly in extreme ultraviolet images from the Atmospheric Imaging Assembly (AIA) aboard NASA’s Solar Dynamics Observatory (SDO) and scientists were able to watch for the first time the very formation of something they had long theorized was at the heart of many eruptive events on the sun: a flux rope.

Eight hours later, on July 19, the same region flared again. This time the flux rope’s connection to the sun was severed, and the magnetic fields escaped into space, dragging billions of tons of solar material along for the ride — a classic CME.

More than just gorgeous to see, such direct observation offers one case study on how this crucial kernel at the heart of a CME forms. Such flux ropes have been seen in images of CMEs as they fly away from the sun, but it’s never been known — indeed, has been strongly debated — whether the flux rope formed before or in conjunction with a CME’s launch. This case shows a clear-cut example of the flux rope forming ahead of time.

“Seeing this structure was amazing,” says Angelos Vourlidas, a solar scientist at the Naval Research Laboratory in Washington, D.C. “It looks exactly like the cartoon sketches theorists have been drawing of flux ropes since the 1970s. It was a series of figure eights lined up to look like a giant slinky on the sun.”

More than just gorgeous to see, such direct observation offers one case study on how this crucial kernel at the heart of a CME forms. Such flux ropes have been seen in images of CMEs as they fly away from the sun, but it’s never been known—indeed, has been strongly debated—whether the flux rope formed before or in conjunction with a CME’s launch. This case shows a clear-cut example of the flux rope forming ahead of time. Vourlidas is a co-author, along with Spiro Patsourakos and Guillermo Stenborg, of a paper on these results published in the Astrophysical Journal on Jan. 31, 2013.

On July 19, 2012, SDO captured images of a solar flare in numerous wavelengths. The 131 Angstrom wavelength, shown here in the middle and colorized in teal, portrays particularly hot material on the sun, at 10 million Kelvin, which is why the incredibly hot flare shows up best in that wavelength. The 131 wavelength was also able to show kinked magnetic fields known as a flux rope that lay at the heart of a coronal mass ejection (CME), which also erupted at the same time as the flare.

Spotting such a foreshadowing of a CME could help scientists develop ways to predict them, says Dean Pesnell, the project scientist for SDO at NASA’s Goddard Space Flight Center in Greenbelt, Md. “By telling us when and where flux ropes will erupt,” Pesnell says. “SDO helps us predict a major source of space weather.”

Scientific research is always a dance between hypothesis and experimental confirmation, and the history of the flux rope is no exception. Plasma physicists suggested that such coils of magnetic field lines were at the heart of flares in the 1970s and spacecraft near Earth provided in-situ measurements that occasionally traced out helical structures inside CMEs. Later, the flux ropes were spotted in images of CMEs captured by the joint ESA/NASA Solar Heliospheric Observatory (SOHO)—which launched in 1995—using the mission’s Large Angle and Spectrometric Coronagraph (LASCO), a telescope that blocks out the bright light of the solar disk in order to better see the tenuous corona around it. They are now a regular appearance on coronagraph and heliospheric imaging observations.

When it came to watching them form in a CME, however, the task was much harder. Since CMEs can form quite suddenly—known as impulsive CMEs—the associated flux ropes are smaller and closer to the surface, making it difficult to spot them amongst the many structures in the corona.

In the absence of direct observational evidence, theorists have produced two theories based on general physics of plasmas and magnetic fields of how and when the flux rope might form. In one, the magnetic structure of the rope exists before the CME, and as it evolves over time it twists and kinks becoming increasingly unstable. Eventually it erupts from the sun, releasing enormous amounts of energy and solar plasma. In the second version, the CME erupts when looping magnetic field lines are severed from the sun’s surface. While the great blob of solar material streams off the sun, the fields reconnect with each other to form a classic flux rope shape.

“In this case, we saw this big eruption on July 19,” says Vourlidas. “We wanted to analyze the eruption and we started going back in time—a few minutes, then an hour, then eight hours. And then we saw it. A flux rope that looked just like the cartoons scientists have been drawing for decades.”

Vourlidas credits this first sighting to three things. First, the team looked far enough back in time, when previous searches have often only looked a few minutes back. Second, the sun obliged its viewers with the perfect angle at which to see the tell-tale loops of the flux rope. SDO’s cameras could look right down the center of the rope, like looking down the tunneled center of a slinky. Third, AIA’s cameras capture imagery that no other cameras do: light at the 131 Angstrom wavelength, which shows solar material heated to temperatures of 10,000,000 K (18,000,000 F / 10,000,000 C). In images of the same region at the same time showing cooler material, the flux rope doesn’t show up at all. AIA scientists chose to include a filter to view this unprecedentedly high temperature because they posited that flares could heat the corona to those temperatures. Apparently the same incredibly hot plasma helped highlight the flux rope that would later give rise to a CME.

Over the course of the next eight hours after the July 18 flux rope formed, the rope did show up faintly in images of cooler material, suggesting that the hot material from the flare cooled down over time as the flux rope also rose in space. Then eight hours later, on July 19, the material got hot again, the region flared, and the flux rope escaped into space.

“We could verify that the flux rope was there in the coronagraph from SOHO. We could see the typical slinky structure with multiple round loops inside it,” says Vourlidas. “We looked at it with other NASA telescopes, too. We looked at it with everything we’ve got. It’s a wonderful time to be a solar physicist, because thanks to the large number of telescopes we have in space at the moment, we can see things like this from every angle.”

By looking at the very hottest material in the sun’s atmosphere (on the left) scientists could observe the tell tale signs of the twisted magnetic fields of a flux rope—which lay at the heart of coronal mass ejections (CMEs). The flux rope doesn’t show up in a nearly simultaneous image of cooler material (on the right). Vourlidas says that images from NASA’s Solar Terrestrial Relations Observatory (STEREO) also helped with analysis. Since the two STEREO spacecraft observe the sun from a different perspective than does SDO, the team got a top-down view of the flux rope with STEREO-A’s EUV Imager, which helped unravel the 3-D structure of the flux rope. The foot points of the rope touched in widely separated areas of the solar surface—an interesting structural development in of itself that is worth further study.

The team will certainly look for other examples in the images of the hottest plasma, searching for evidence of pre-formed flux ropes further back in time. But even one such example of direct evidence adds an important step to the constant scientific cycle of theory and observation, helping refine and improve the theories of what causes these giant explosions on the sun.