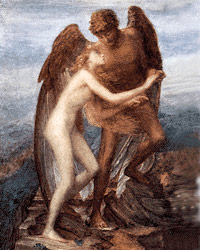 Nephilim Giants According to the Bible
They are spoke of in Genesis 6:4 under the name Nephilim. The word is derived from napha –either in the sense to throw down or to fall (=fallen angels Is. Xiv. 12; Luke x. 18). gconjectures about the origin of these Nephilim in Gen. vi. 1-4. We are told that “there were Nephilim in the earth,” and theat afterwards the “sons of God” mingling with the beautiful “daughters of men” produced a race of violent and insolent Gibborim (“mighty men’). The genealogy of the Nephilim, or at any rate of the earliest Nephilim, is not recorded in Scripture, and the name itself is so mysterious that we are lost in conjecture resepecting them.
The sons of the marriages mentioned in Gen. vi. 1-4 are called Gibborim, a general name meaning powerful. They were not necessarily giants in our sense of the word. Yet, as was natural, these powerful chiefs were almost universally represented as men of extraordinary stature. But who were the parents of these giants? Who are the “sons of God”? The opinions are various:- (1) Men of power (2) Men with great gifts, “in the image of God.” (3) Canaanites arrogantly assuming the title; or (4) the pious Sethites (comp. Gen iv. 26). (5) Worshippers of false gods. (6) Devils, such as Incubi ans Succubi. (7) Closely allied to this is the oldest opinion, that they were angels. The rare expression “sons of God” certainly means angels in Job I. 6, ii. 1, xxxviii. 7 and that such is the meaning of Gen. vi. 4 also was the most prevalent opinion both in the Jewish and early Christian Church.
It was probably this very ancient view which gave rise to the spurious Book of Enoch, and the noton from it by St. Jude (6) and alluded to by St Peter (2 Pet. ii. 4; comp. 1 Cor. Xi 10). Every one will remember the allusions to the same interpretation in Milton, Par Reg. ii. 179-The next race of giants of giants which we find mentioned in Scripture is The Rephaim, a name which fequently occurs, and in some remarkable passages. The earliest mention of them is the record of their defeat by Chedorlaomer and some allied kings at Ashteroth Karnaim (Gen. Xiv. 5) Extirpated, however, from the east of Palestine, they long found a home in the west (Sam xxi. 18 sq. 1 Chr. xx. 4) It is probable that they had posssessed districts west of the Jordan in early time, since the “Valley of the Rephiam” ( 2 Sam. v. 18 : 1 Chr xi. 15 ; Is. Xvii. 5), a rich valley S.W. Of Jerusalem, derived its name from them. They were probably one of those aboriginal people to whose existence the traditions of many nations testify, and of whose genealogy the Bible Gives us no information.
In A. V. the words used for it are the “Rephaim” “Giants”, and the “Dead.” Thatit has the latter meaning in many passages is certain (ps. Lxxxviii. 10; Prov. Ii 18, ix. 18, xxi. 16; Is. Xxvi. 14, 19.) An alternatice consideration seems to leave litle room for doubt that the dead were called Rephaim, from some notion of Sheol ( A. V. “hell”) being the residence of fallen spirits or buried giants. Branches of this great unknown people were called Emin, Anakim, and Zuzim. Emin, smitten by Chedorkaomer at Shaveh Kiriathaim ( Gen. xiv. 5) and occupying the country afterwards held by the Moabites (Deut. ii. 10). Anakim, the imbecile terror of the spies exaggerated their proportion into soething superhuman (Num. Xiii. 28, 33) and their name became proverbial (Deut. Ii 10. ix. 2). Zuzim, whose principle town was Ham (Gen. xiv. 5), and who lived between the Arnon and the Jabbock, being a northern tribe of the Rephaim.