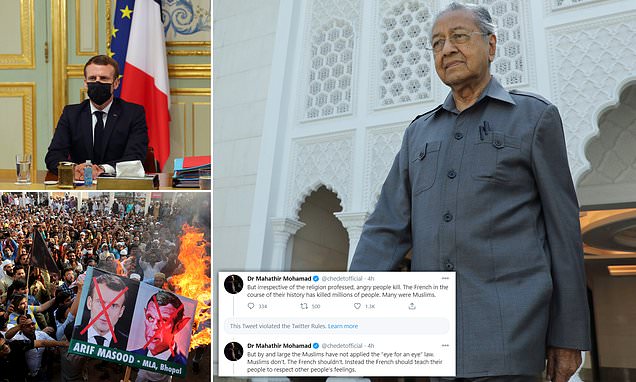 Mahathir Mohamad said freedom of expression does not include ‘insulting other people’ as fury over satirical cartoons of the Prophet Mohammed sweeps the Islamic world.

Malaysia‘s former prime minister said that Muslims have the right ‘to kill millions of French people’, shortly after a knife-wielding Islamist killed three people in a deadly terror attack in Nice.

Mahathir Mohamad, who lost power in February this year, said freedom of expression does not include ‘insulting other people’ as fury over satirical cartoons of the Prophet Mohammed sweeps the Islamic world.

The 95-year-old politician said he did not approve of the beheading of a French school teacher for sharing caricatures of the Prophet, but said: ‘Irrespective of the religion professed, angry people kill’.

‘The French in the course of their history [have] killed millions of people. Many were Muslims,’ he said in a tweet which has since been removed for violating the website’s rules.

Mahathir, who has drawn controversy for comments about Jews and LGBT people in the past, went on: ‘Muslims have a right to be angry and to kill millions of French people for the massacres of the past.’

The Malaysian politician said that ‘by and large’, Muslims have not applied the principle of ‘eye for an eye’: ‘Muslims don’t. The French shouldn’t. Instead the French should teach their people to respect other people’s feelings’.

Mahathir, who served as Malaysian premier twice for a total of 24 years, said that French President Emmanuel Macron was ‘very primitive’ and ‘not showing that he is civilised’.

‘The only thing that should be said today is to completely condemn those attacks. The only response is to be utterly, utterly devastated,’ Mr Morrison told 2GB radio on Friday morning.

France’s digital minister demanded that Twitter also ban Mahathir from its platform, with Cedric O saying he told the managing director of the social media giant in France that his account ‘must be immediately suspended.’

The former Prime Minister made no direct reference to the attack in a church in Nice, but his comments come amid fury across the Islamic world at President Emmanuel Macron for defending caricatures of the Prophet Mohammed, and on the day that Sunni Muslims mark the Prophet’s birthday.

It came during a day of terror for France, in which: