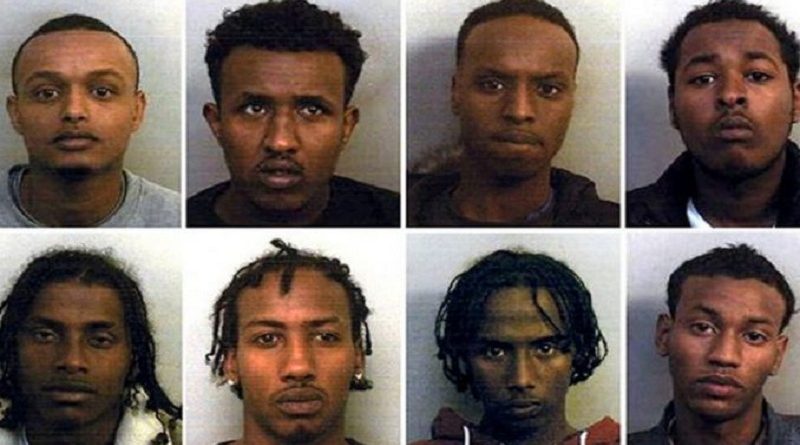 This is the chilling moment a member of a 13-strong Somali prostitution gang checks into a hotel where he and a friend would rape a 13-year-old schoolgirl three times. Jusuf Abdirizak, 20, can be seen at the reception of the Premier Inn in Bristol where he and Said Zakaria, 22, attacked the girl, who had been trafficked across the city having already been raped by another man. Abdirizak and Zakaria were both facing jail today after they and 11 other men were convicted for their parts in the rape, abuse and prostitution of four British teenagers, who were were preyed upon and passed around the men’s friends for money.

Ordeal: The girl was pinned to a bed in the hotel room and raped by Zakaria, before he took her into the bathroom and raped her a second time. The girl went back into the bedroom where Abdirizak raped her. Several of the girls were groomed to the extent they believed the sexual abuse was part of loving relationships they were having with the defendants, and that having sex with their ’boyfriend’s’ friends was part of their ’culture and tradition’.

Of the four girls, three were white and one mixed race, with a fifth girl witnessing many of the sickening assaults. The girls, aged between just 13 and 17 were in local authority care and fell into the evil clutches of the paedophiles who used the fear of rape to control them. Some were persuaded to have sex with their ’boyfriend’s’ friends as it was Somali ’culture and tradition’ and ’men always have sex with each other’s girlfriends’.

The victims, described as ’vulnerable’ due to their age and circumstances, were paid as little as £30 or given drugs, alcohol and gifts to perform sex acts on older men. A total of 14 men were convicted of charges including rape, sexual activity with a child, facilitating child prostitution, trafficking, paying for the sexual services of a child and drug offences.

Defendants were tried in two separate trials at Bristol Crown Court this year, with eight jailed for between 18 months and 13 years following the first one this summer. The remaining seven men, were convicted by a jury yesterday following 32 hours and 17 minutes of deliberations, and will be sentenced at the court tomorrow. The conviction of the men can be reported for the first time after the conclusion of a second trial at Bristol Crown Court.

The Bristol case comes after allegations, convictions and resignations over organised child abuse and exploitation across English towns and cities including Rotherham, Rochdale, Oxford and Telford. Serious case reviews are now underway to try to understand how the girls became victims. The Home Office does not comment on individual cases. However, all of the men are understood to have been in the UK legally, with the majority having been in the country since they were children and some were born here. Avon and Somerset Police uncovered a two-year catalogue of abuse against 10 girls during their investigation into the Somali men, codenamed Operation Brooke.

The first trial centred on a group of Somali drug dealers based in the Stapleton Road area of Easton in Bristol and their exploitation of primarily one teenage girl. She had been moved into a flat on her own in Bristol and left almost unsupervised by social workers from outside the city. Police found her wearing just a bra and knickers cowering in a cupboard under a sink. She told them ’they made me do stuff’. Zakaria, who was known to his friends as Target, was involved in both the first and the second trials.

He admitted supplying cocaine and heroin but the convictions could not be reported until the end of the second trial because of the overlap. The first trial heard how the abusers used the flat of the 16 year-old girl in Easton, Bristol as a base for supplying drugs. She became the target of sexual exploitation, together with two sisters who would visit her. It was only when the younger sister ran away from her foster parents, and police visited the flat looking for her, that authorities uncovered what was happening. Mustapha Farah, 20, aka Greens, Liban Abdi, 21, alias Leftback, and Arafat Osman, 20, aka Lefteye, were convicted of preying on vulnerable teenage girls and paying for their sexual services.

Idleh Osman, 21, known as Sniper was found guilty of arranging or facilitating payment for sexual services of a child. All four also pleaded guilty to a supplying heroin and cocaine. Mustafa Deria, 22, and Abdulahi Aden, 20, known as Trigger, were found guilty of rape. Aden was also found guilty of supplying cocaine and heroin, as well as admitting two counts of possession of indecent photos of a child. Another man, Mohamed Jama, 23, known as Magic, admitted supplying cocaine with Zakaria who also admitted supplying heroin. Greens, Lefteye and Trigger were given 13 years behind bars, Sniper, 10 years, Leftback 13 years and eight months and Deria, seven years six months.
A ninth man was acquitted. The second trial focused on another group of young Somali men – but included Zakaria – and their grooming and subsequent sexual abuse of young girls in Bristol.

Mohamed Jumale, 24, Mohamed Dahir, 22, Zakaria, Abdizirak, Omar Jumale, 20, Abdirashid Abdulahi, 21 and Sakariah Sheik, 21, were all convicted of child sexual exploitation offences yesterday. During this second trial, the court heard that Mohamed Jumale, known as Deeq, convinced girls it was ’his tradition’ for the girl to have sex with his friends. He was convicted of one count of rape, seven of sexual activity with a child and one of aiding or abetting another into the same offences. Four of the counts were against victim A. The court heard that the gang gave the girls money and paid for hear extensions and trips to restaurants and night clubs, then passed them around for sex.

Anna Vigars, prosecuting at Bristol Crown Court, said: ’He wanted her to have sex with his friends, that that was his tradition, his culture and that that was what always happened. ’Men always have sex with each other’s girlfriends. She didn’t believe him but that is the line he was feeding her. ’She was saying no to him, telling him she wasn’t interested, but he made her have sex with all of the men.’ The court heard how the Somalis had ’a good knack’ of preying on vulnerabilities and groomed their naive victims into thinking the men loved them and were their ’boyfriends’.

The children began to believe the abuse they were subjected to was ’normal’ and ’expected of them’. The court heard the despicable web began to unravel after booked a hotel room so they could take turns raping girl A in December. Zakaria and Abdirizak, who was nicknamed Starns, booked the room in the Premier Inn in Bristol. Zakaria persuaded victim A and a friend to go there and he picked them up but took them first to a flat in Barton Hill, Bristol. There A was raped by an unknown man before being driven to the hotel where she was taken to a room and told to strip so Zakaria could have sex with her. She was pinned to a bed and lay with her eyes closed as he raped her once and then a second time, over the sink in the bathroom.