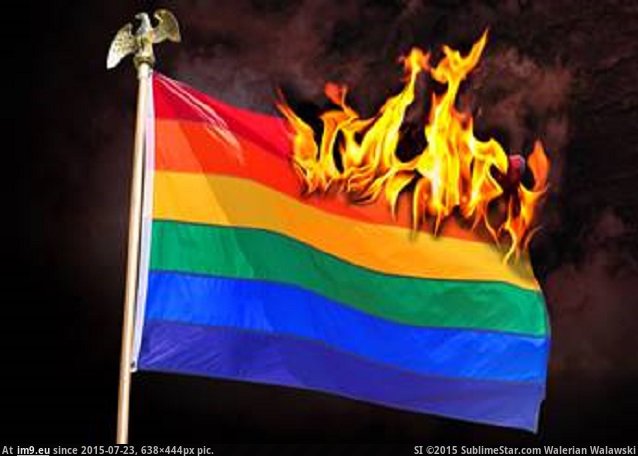 Over the past few month’s I have seen many in the gay community call for Islamic people to join them in their fight for equality. I’ve always found this laughable because homosexuality is something that is definitely unacceptable in the Islamic community.

B some estimations “The LEFT” has set up the homosexual community embracing Islam into the United States. Maybe a recent protest will bring to light the type of “tolerance” that can be expected.

HOUSTON, TX- Smoke choked the streets of the city of Houston as Islamic protesters gathered to oppose the Supreme Court’s decision upholding gay marriage. Throughout the day members of the Muslim community prowled the city streets, tearing down LGBT flags from public buildings and private residences. A large pile containing hundreds of LGBT flags was burned later during a massive anti-gay-marriage rally.

Susan Griffon, an outspoken lesbian and LGBT supporter, had her nose broken with the heel of a shoe that was used like a club, as she wrestled with a group of protesters ripping an LGBT flag out of her cigar shop window. The assailants who beat her shouted, “you are not a man, stop dressing like it.” They walked off with the flag, leaving her unconscious on the sidewalk.

Muhmar Al-Sajeer, one of the organizers of the rally, welcomed attention of the media. “We have objected verbally time and again to the LGBT people,” he told reporters. “We told them we did not want to see their insensitive rainbow flag everywhere, as it offends our eyes and souls. They ignored our pleas and flaunted that filth in our faces anyway. The only way we could respond to their provocation was to take back our streets by force.”

So when a group of people who “can’t be offended” attacks another group of people who “can’t be offended” which side will the left and their media support? The silence from the left tells us all we need to know. There will be no arrests, no reprisals, and no homosexuals marching and calling Muslim’s names. MSM and the White House will avoid addressing this issue. Barack Obama will eventually say intolerance will not be accepted and condemn it. He will not do anything about his Muslim brothers. Homosexuals have finally hit a brick wall.

At the end of the day these Muslims have created a problem for the politically correct world. Until now, the Left has supported Muslims and ignored their behavior. I have heard many speak of “extending” the “family”, now they will have to choose. LMAO!