“Those were not meteorites, it was Americans testing their new weapons,” Mr. Zhirinovsky confessed to journalists. “[US Secretary of State] John Kerry wanted to warn [Russia’s Foreign Minister] Lavrov on Monday, he was looking for Lavrov, and Lavrov was on a trip. He meant to warn Lavrov about a provocation against Russia,” he said.

The US Department of State has recently said that John Kerry has been unable to get in touch with Russia’s Sergei Lavrov, who is away on his Africa tour, for three days to discuss urgent global issues, including the North Korean threat and the escalating Syrian crisis.

A screen shot of the meteor explosion. 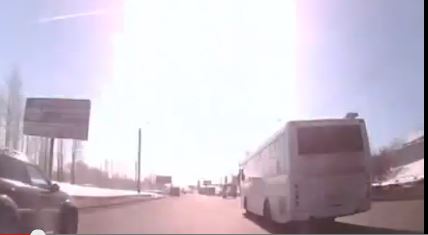 The blast is thought to have occurred at an altitude of 50 kilometers, according to a Russian astrophysicist.  According toValery Shuvalov of  the Institute of Geosphere Dynamics RAS, the meteorite most likely was a type of iron-nickel meteorite, as only those objects are strong enough to reach the lower layers of the atmosphere. According to him, “This body is probably the size of the order of meters and a mass of several tons.”

The meteorite that struck the Russian region of Chelyabinsk was several meters in diameter, weighed around a dozen tons and had the energy of several kilotons, experts from the Russian Academy of Science say.

According to their estimates, the space object entered the atmosphere at a speed of 15-20 kilometers per second and burst into flames some 30-50 kilometers off the ground reports the Voice Of russia.