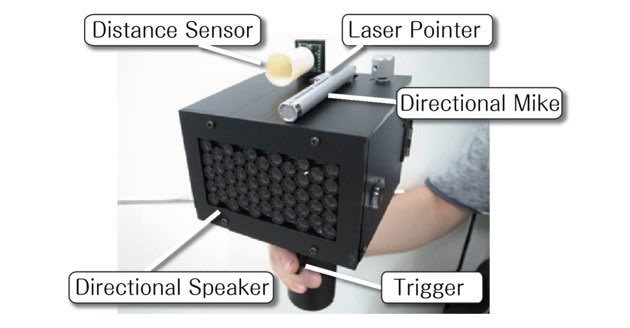 Ever since humans first invented guns, they’ve been inventing new uses for them. Some shoot bullets; others shoot lasers. But a strange and unsettling new gun being developed by Japanese researchers shoots sound waves in an effort to disrupt and silence anyone who dares speak out of turn.

The gun operates based on the concept of delayed auditory feedback. An attached microphone picks up the sound being made by the target and plays it back 0.2 seconds later. The effect is incredibly confusing to the human brain, making it all but impossible to talk or hold a conversation. The device doesn’t cause the person it’s being used on any physical harm — it simply messes with their head.

When the human brain hears its own speech perfectly in sync during normal speech, it easily processes the input and allows you to largely ignore the sound of your own voice. However, by offsetting the response just a bit, the brain hears your mouth speaking as well as the strange echo effect produced by the gun. This unusual combination is confusing enough to effectively shut down the part of your brain responsible for managing speech, and you fall immediately silent.

The first versions of the weapon — if we can even call it that — were dependent on a separate PC to process the input and relay it back to the speaker. However, the second prototype (pictured above) does away with the need for additional hardware and includes all the necessary processing bits within its casing, making it easily portable.

The developers say the gun could be used for seemingly innocuous purposes, such as enforcing rules requiring library patrons to keep quiet. It could also see action during large meetings when it is important that onlookers not disrupt the speaker; anyone who fancies a noisy outburst would immediatley be silenced by the high-tech handheld.

The free speech implications of the speech jammer are somewhat disconcerting: A protestor or speaker at a political rally could be easily silenced just for having unpopular views. Political rallies and other protest gatherings could easily be quieted by the strange gun, should law enforcement or other agencies decide to equip themselves with the technology.