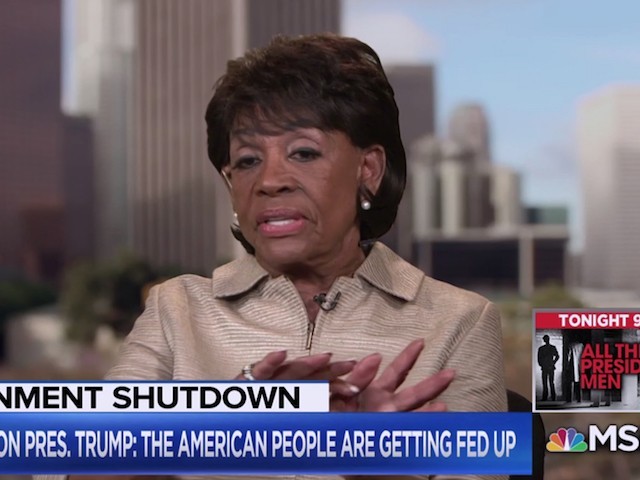 Sunday on MSNBC’s “AM Joy,” Rep. Maxine Waters (D-CA) said President Donald Trump is a “criminal” who should be impeached. Waters said, “Well, I hate to | Video

Source: Maxine Waters: ‘I Told You So’ — Trump ‘Is a Criminal’ He Must Be Impeached | Breitbart

“Well, I hate to say it but it’s like I’m going to say it, I told you so. Remember I started out talking about this president even before the inauguration. I talked about him being a despicable character. I talked about him not being worthy of the presidency United States of America.”

“I said it’s not about wanting to undermine our democracy, it was about lifting those sanctions. I believe that the agreement of Manafort and Putin, coming to the campaign to begin with was to do everything they could do so that he could get this president elected so he could be the president that was going to lift these sanctions so they could all make money. I continue to say you follow the money and you’ll watch all of these thieves. This president has brought a criminal enterprise into the White House.”

“I do believe that the Congress of the United States of America have not assumed their responsibility that’s given to us by the Constitution of the United States by way of impeachment. This president in my estimation has been everything possible to certainly be eligible for impeachment. I really do think that it should be started. I think there have been a couple of attempts that certainly did not win support because the Republicans were in charge of both houses, but I do believe impeachment should begin. I know a lot of people don’t agree with me. Some say it would be too disruptive. I have said over and over again we can walk and we can chew gum at the same time. We can be about the business of health care. We can be about the business of infrastructure. We can be about setting the country on the right course to undo many of the things the administration has done to literally undermine the very people they are supposed to represent. So I think we can do it all. We cannot continue with the president who lies. The president is a criminal. The president worked with Cohen, instructed him to go and pay these women to be quiet, to shut them up. The president was not just simply complicit in all of this, he is the one that initiated this with his attorney. This criminal must be brought up by the Congress of the United States for impeachment.”