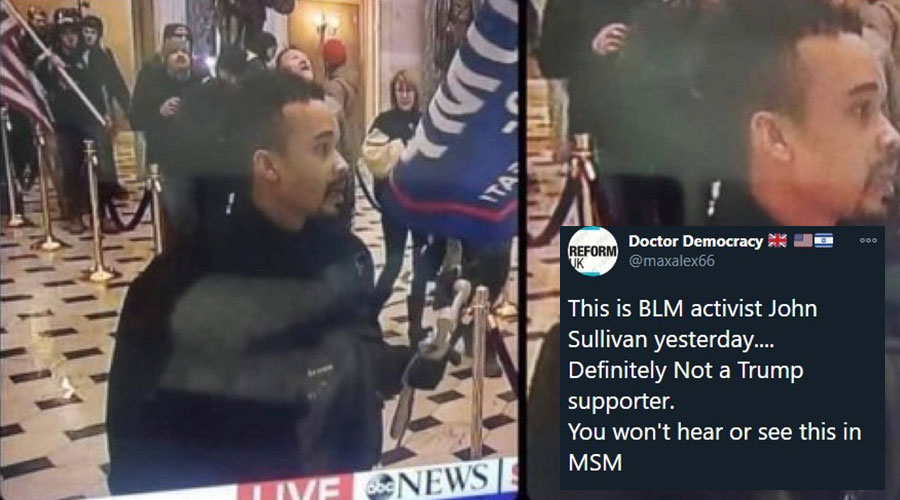 A man who was part of the mob that broke in to the Capitol in D.C. has been identified as a founder of a radical left-wing activist group.

Why, you ask, was a radical left-wing activist inside the Capitol building?

The man, John Sullivan, who founded the far-left Insurgence USA, filmed the death of Ashli Babbit according to his latest interview with CNN.

Sullivan’s appearance at the siege of the Capitol building raises eyebrows considering he was arrested in July for his part in riots and protests all across Salt Lake City.

This makes one think why was a radical leftist at Trump’s “Save Our Country” Rally and why was he conveniently at the place where Ashli Babbit was killed?

John Sullivan, recorded a video of the aftermath, showing police with guns drawn and Babbit lying in a pool of blood in a stairway inside the Capitol.

Sullivan is the founder of the left-wing activist group Insurgence USA. He said he was not at the Capitol as part of the protest but did not specify what exactly brought him there.

Describing the moments leading up to the shooting, Sullivan said protesters were trying to get into the main entrance of the chamber when they came upon two guards who refused to move.

The group then went down another hallway and used flag poles and other items to break windows to get into the chamber before a group of police emerged.

‘All we see is these guns coming out of the doorway, just guns, and all you can see is their hands. You could not see faces,’ he said.

‘Right when I saw that I was yelling to people: ‘Guys, there is guns, you don’t want to go through there. They’re going to shoot.”

Babbit ignored Sullivan’s plea and went ahead anyway, he said.

Is this just a meaningless coincidence?

Source: Man Inside Capitol During Riots Has Been Identified As Radical Left-Wing Activist — He Filmed Death Of Trump Supporter – enVolve