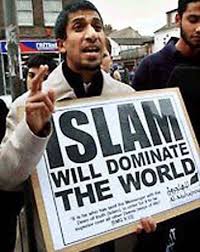 matters like ‘race’ and ‘racism’ (in actuality religious apartheid and Islamic supremacism) in a curious kind of double-talk, language that seeks to obfuscate reality rather than clarify it. Doublespeak usually characterizes governments which actively discourage critical thought and an informed citizenry. Malaysia and its government are no different.

Today’s government broadsheet, as usual, prominently figures Prime Minister Najib’s latest broadside.  Najib’s words is full of typically Malaysian double-talk. In the interests of clarification and the truth, it’s time to translate Najib’s words and see what he really means. From “PM: Move from ‘tolerance to acceptance’ of multi-racial M’sia”, by Saodah Elias and Embun Majid, The Star, 28 July 2011:

ALOR SETAR: Malaysians must break down all walls that seperate [sic] and differentiate them from each other, said Prime Minister Datuk Seri Najib Tun Razak.

Saying that being tolerant is no longer enough, the Prime Minister invited Malaysians to embrace the spirit of total acceptance.

“If we say we are tolerant of each other, that means there still exists walls that will make us fell a bit uneasy with each other.

“But if we accept each other, then we can celebrate our togetherness and be fully united as Malaysians,” he said…

Najib may speak of ‘acceptance’, but never will he, nor any (Muslim) Prime Minister, state for the record that Muslims are the equal of non Muslims, or vice-versa. That would be extremely un-Islamic, and probably ‘disruptive’ to harmony as well (i.e. Muslims would riot, or at the very least threaten mayhem in such an event).

As for the ‘acceptance’ that Najib mentions, it’s funny how Muslims keep seeking, or more likely. demanding ‘acceptance’ from every non Muslim in the vicinity. This can really only mean one thing for Muslims — the acceptance of Islam. Nothing is more paramount for a Muslim than this. ‘Breaking down the walls that ‘seperate’ Malaysians’, as Najib has so implored, means that Islam can better flow, with less hindrance, into every nook and cranny of every Malaysian’s public and private life.

And making everyone in Malaysia Muslim would certainly fulfill Najib’s fervent wishes to be a less differentiated, more united Malaysia. When Najib and his government harangue the nation with their ceaseless ‘1Malaysia’ mumbo-jumbo, this is the real message behind their motto.