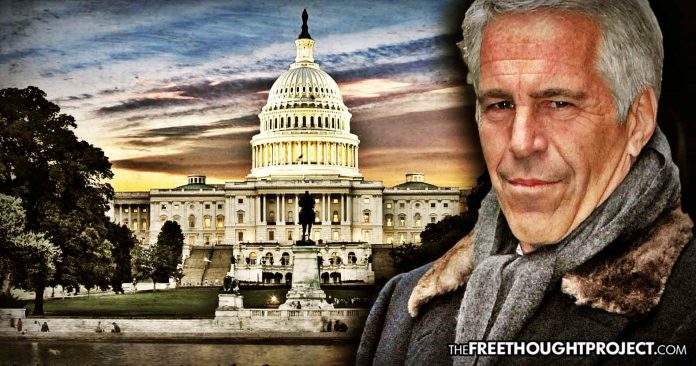 Mainstream Media is finally reporting on the billionaire pedophile, Jeffrey Epstein and his connections to establishment insiders like Clinton and Trump.

Source: Mainstream Media Finally Reporting on How the Elite Gave Billionaire Pedophile Jeffrey Epstein a ‘Deal of a Lifetime’

For years, the Free Thought Project has been set on exposing the cozy relationship between billionaire convicted pedophile Jeffery Epstein and high-level establishment insiders. And, for years, we’ve been one of only a few voices out there willing to report on this corruption and depravity inside politics. That is, until now.

This week, in a bombshell report out of the Miami Herald, Epstein’s ties to the past administrations—as well as the current one—were laid out for the world to see. Instead of ignoring it, however, this time, mainstream media outlets like CNN picked up the story and ran with it.

Last year, the Free Thought Project reported on Trump’s pick for Labor Secretary, Alexander Acosta. As TFTP noted, former U.S. Representative, Cynthia McKinney, was none too pleased with this confirmation, tweeting shortly after the news,

Epstein is a convicted child molester and sexually abused no less than 40 underage girls. Despite this fact, Acosta protected him while serving as a U.S. Attorney in Florida.

Instead of going to prison for life, as he should’ve considering the evidence against him, Epstein only got 13 months and was allowed to stay in the Palm Beach County Jail in his own private cell where he was allowed to leave the prison six days a week for “work release”. Epstein was forced to register as a sex offender for life, but with his money and his connections he doesn’t seem too bothered. He currently resides on his private island in the Virgin Islands.

As the report in the Herald notes:

The eccentric hedge fund manager, whose friends included former President Bill Clinton, Donald Trump and Prince Andrew, was also suspected of trafficking minor girls, often from overseas, for sex parties at his other homes in Manhattan, New Mexico and the Caribbean, FBI and court records show.

Facing a 53-page federal indictment, Epstein could have ended up in federal prison for the rest of his life.

But on the morning of the breakfast meeting, a deal was struck — an extraordinary plea agreement that would conceal the full extent of Epstein’s crimes and the number of people involved.

Not only would Epstein serve just 13 months in the county jail, but the deal — called a non-prosecution agreement — essentially shut down an ongoing FBI probe into whether there were more victims and other powerful people who took part in Epstein’s sex crimes, according to a Miami Herald examination of thousands of emails, court documents and FBI records.

The pact required Epstein to plead guilty to two prostitution charges in state court. Epstein and four of his accomplices named in the agreement received immunity from all federal criminal charges. But even more unusual, the deal included wording that granted immunity to “any potential co-conspirators’’ who were also involved in Epstein’s crimes. These accomplices or participants were not identified in the agreement, leaving it open to interpretation whether it possibly referred to other influential people who were having sex with underage girls at Epstein’s various homes or on his plane.

These are undisputed facts — yet Trump still appointed Acosta.

During his appointment hearing last year, Acosta defended the way he handled the Epstein case.

Acosta is ignoring the dozens of other victims who’ve provided evidence against the billionaire and are currently seeking civil suits against him after the state failed to act.

The Herald then goes on to detail Epstein’s snitching to the FBI, which remains secret. Some have speculated that this information was so damning to establishment insiders—as in evidence that they participated in these underage sex parties—that it essentially granted Epstein a lifelong get out of jail free card. Indeed, according to the terms of the agreement, it does.

While the Herald’s report is certainly bombshell in nature, it is nothing new. This information has been out for a while and TFTP has been exposing it since the beginning.

As TFTP reported, earlier this year the FBI released hundreds of new documents onto their online depository, The Vault. Some of the documents relate to the case against Jeffrey Epstein. One memo from September 18, 2008 states:

In May, the FBI released nearly 300 pages of documents in eight parts. Although the majority of the content was made up of clippings from newspaper articles about Epstein, lists of the pages that had been deleted, and large blank spaces where information was being redacted, there was one document that stood out. Page 21 of Part 6 stated:

As Derrick Broze pointed out in an extensive research piece for TFTP, a lawsuit against convicted sex offender and billionaire Jeffrey Epstein is scheduled to begin December 4th in Palm Beach County Circuit Court. If the trial is not further delayed or a settlement is not reached the public may learn more details of Epstein’s disturbing pedophile adventures.

The fact that the mainstream media is just now giving this case the attention it deserves makes sense. Because it is potentially damaging to the Trump administration, the media has no problem reporting on it now. But their complicit nature in previous years exposes their dangerous partisan bias.

The fact of the matter is that both parties are tied to Epstein as well as Hollywood elites and foreign nationalists. The depth of this depraved abuse are endless and this is likely why the FBI has no problem openly declaring Epstein’s immunity. A travesty indeed.