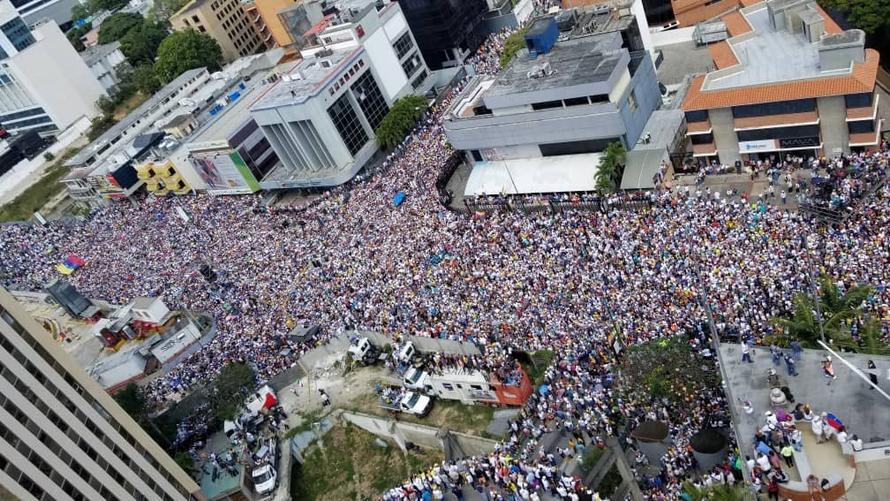 “If the north American empire attacks us, we will have to defend ourselves… We aren’t going to hand Venezuela over…Stop. Stop, Trump! …you will leave the presidency stained with blood…”

Less than  twenty-four hours  after telling thousands of supporters that he “agreed” and was “committed to holding parliamentary elections this year,” as demanded by the National Assembly…

…embattled Venezuelan President Nicolas Maduro has flip-flopped rather aggressively, warning Donald Trump he will leave the White House “stained with blood” if he insists on pursuing what he called a “dirty” imperialist conspiracy to overthrow him.

The Guardian reports that Maduro warned, during a combative interview with the Spanish journalist Jordi Évole,

“Stop. Stop, Trump! Hold it right there! You are making mistakes that will leave your hands covered in blood and you will leave the presidency stained with blood,”

“Why would you want a repeat of Vietnam?”

Maduro clearly signalled that he had no plans to go anywhere…

“If the north American empire attacks us, we will have to defend ourselves… We aren’t going to hand Venezuela over…”

However, Maduro admitted he was facing a “tough” fight against powerful opponents, but was not backing down…

“They use sledgehammers instead of boxing gloves,” Maduro said of the US, which he claimed was seeking to topple him to seize Venezuela’s oil.

“But it’s like David against Goliath,” Maduro went on. “We have our secrets too – and we have our sling. David’s sling is in our hands.”

Maduro also sent a message to his opposition challenger Guaidó:

“Think carefully about what you are doing,” he said, urging Guaidó “to abandon his coup-mongering strategy”.

“We don’t accept ultimatums from anyone. I refuse to call for elections now – there will be elections in 2024. We don’t care what Europe says.”

Adding, “you can’t base international politics on ultimatums. That’s the stuff of the empire, of colonial times.”

Speaking to CBS on Sunday, Trump said he had rejected talks with Maduro “because so many really horrible things have been happening in Venezuela”.

Asked if military action was possible, he replied: “Well I don’t want to say that. But certainly it’s something that’s on the – it’s an option.”

Seems like it is time for Trump to unleash a “fire and fury” tweet to get things back on the diplomatic track.

WATCH – U.S. forces arrive in Colombia prepared to step in and provide support to the people of Venezuala.

A small armored column was spotted in the streets of San Antonio del Táchira this evening.