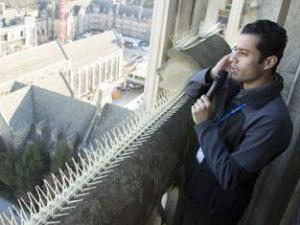 Durham, N.C. — A “credible and serious security threat” was a primary reason that Duke University officials on Thursday abandoned plans to allow Islamic students to start broadcasting a weekly call to prayer from the Duke Chapel tower, a spokesman said.

The university announced plans Tuesday for members of the Duke Muslim Students Association to start the three-minute weekly call or chant, known as adhan or azan, on Friday afternoon.

The decision caused a national furor, with Franklin Graham, the son of evangelist Rev. Billy Graham and the head of the international relief organization Samaritan’s Purse, posting on his Facebook page that followers of Islam are “butchering” people who don’t share their beliefs and urging Duke alumni and supporters to withhold donations.

In a Thursday interview with WRAL News, Graham refused to back down, even for those Muslims who have condemned radical Islamic actions.

Michael Schoenfeld, Duke’s vice president for public affairs and government relations, said Thursday that the call to prayer would take place in a quad outside the chapel.

“Duke remains committed to fostering an inclusive, tolerant and welcoming campus for all of its students,” Schoenfeld said in a statement. “However, it was clear that what was conceived as an effort to unify was not having the intended effect.”