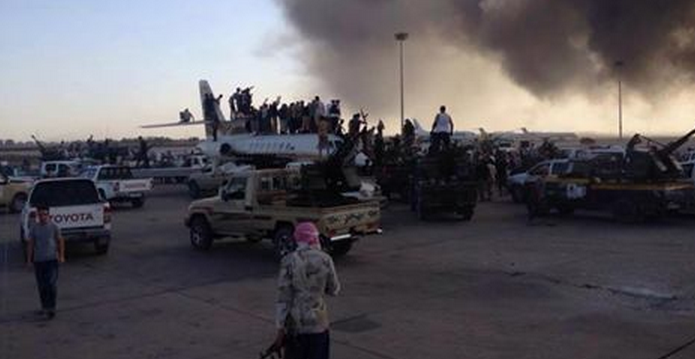 Libya could be on the brink of having its assets frozen by the international community, according to analysts and a former senior official, as the result of an ongoing battle for control of the country’s central bank.The fight for Libya’s financial resources is becoming increasingly recognised as the fundamental driver in a civil war between rival coalitions of cities, tribes, military forces and parliaments. Hundreds have been killed and 250,000 displaced in fierce clashes across the country between the Islamist-Misrata coalition called Libya Dawn and forces led by Khalifa Haftar, a former Gaddafi general who returned to aid the revolution in 2011 before going rogue.

The capital Tripoli is now under the control of Libya Dawn and the former Islamist-dominated General National Congress (GNC) has reconvened to rival the recently elected House of Representatives, based in the eastern city of Tobruk, which increasingly seems to have given its support to Haftar’s Operation Dignity.The pivotal battle for control of Libya’s wealth centres on the Central Bank of Libya (CBL), which holds the key to the country’s financial assets due to its possession of more than $100 bn in foreign currency and investments. It also receives and accounts for the sale of Libya’s vast oil reserves, which provide for more than 95 percent of state revenue.

Analysts said the CBL’s role is amplified by its monopoly on Libya’s banking system.
“The CBL is important because it controls monetary regulation and capital flows,” said Mark Dempsey, a former advisor to the Central Bank of Iraq, who has carried out extensive research on Libya’s financial institutions. “The private banking sector is pretty much dead and none of those banks are lending, so they put all their deposits at the CBL.”“This is the only way for private banks to earn money,” he added.

Politicians on all sides in Libya have sought to seize control of the CBL’s resources since oil output plummeted after the 2011 revolution. IMF data from April said oil production in 2014 will decline by 40 percent compared to 2013 levels and that government revenues will this year suffer a 45 percent dip as a result.

In the midst of rising government spending, the IMF has warned against using the CBL as a route to solving a deepening financial crisis.“At the end of 2013 combined international reserves at the Central Bank and Libyan Investment Authority (LIA) were estimated at 180 percent of GCP,” the IMF said in its April forecast. “The drawdown of reserves is expected to accelerate from one percent of GDP in 2013 to 30 percent of GDP in 2014.”“The combination of hydrocarbon output disruptions – caused by the spiralling security crisis – and runaway spending could deplete Libya’s financial reserves in less than five years,” it said.

The CBL has desperately appealed to be left out of the political wrangling between the GNC in Tripoli and the popularly elected HoR in Tobruk.