‘It is carpet bombing style censorship’

A video SPLC published was among those nixed after YouTube announced plans Wednesday to remove videos and content that promote white supremacy. Journalist Max Blumenthal lashed out at the company after the video, which reports on Holocaust denialism, was pulled for violating the new policy.

“In @YouTube’s political purge, my video report for the @splcenter exposing Holocaust revisionist David Irving as a fascist and fraud historian was removed. This purge has already gone well beyond its stated aim. It is carpet bombing style censorship,” Blumenthal wrote on Twitter Friday. 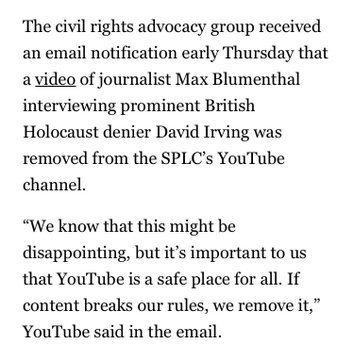 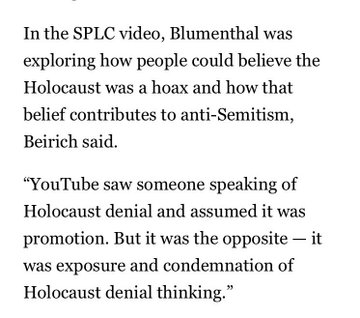 In @YouTube’s political purge, my video report for the @splcenter exposing Holocaust revisionist David Irving as a fascist and fraud historian was removed.

This purge has already gone well beyond its stated aim. It is carpet bombing style censorship. https://t.co/jqSnDuSIwa pic.twitter.com/d3YAvxnZtK

Heidi Beirich, director of the SPLC’s Intelligence Project, mirrored much of Blumenthal’s concerns. YouTube needs to weed out bad actors from those who are trying to call out racism and white supremacy. She blamed a sloppy algorithm for the problem. 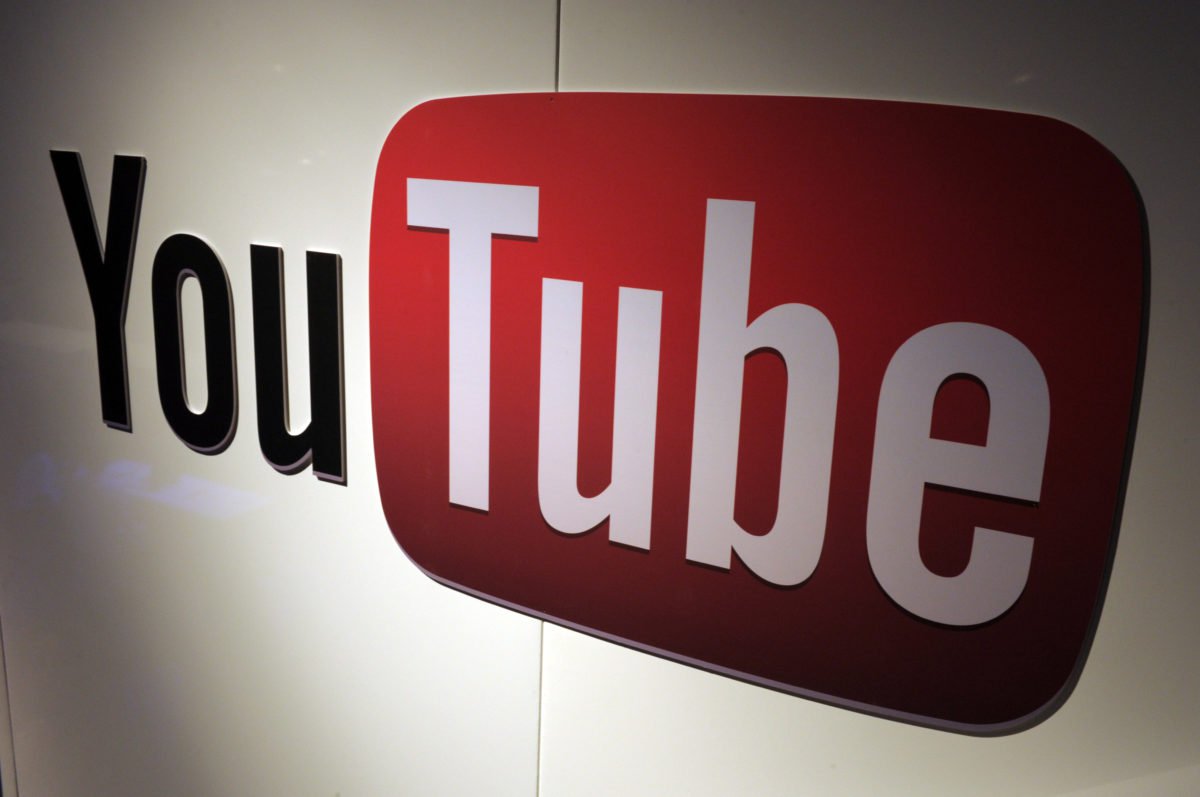 “Companies that make billions of dollars a year can certainly figure out a way to fix this,” Beirich told the Los Angeles Times Thursday. “Hopefully they don’t get caught up in this purge, but you could see how they might … if you have a ham-handed process.” (RELATED: YouTube To Step Up Suppression Of Videos That Don’t Violate Any Rules, Promote News Outlets)

Other activist and liberal journalists expressed their opinions.

“A policy that attempts to ban hateful content is only as effective as the mechanisms implemented to enforce such rules,” Color of Change President Rashad Robinson said in a statement Friday. “If executed poorly, this policy could contribute to even more harm for black communities and other communities targeted by white supremacist ideologies.”

Jordan Chariton, a journalist who formerly worked for The Young Turks, also weighed in on the debacle. “This overreaction to individual offenders to then destroy the livelihoods of those who cover war & corporate power critically is absurd and polar opposite of what YouTube’s mission once was. Punish INDIVIDUAL hosts if they are selling shirts based on homophobia. Stop punishing others,” he said on Twitter Wednesday.