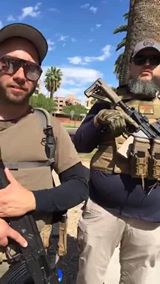 Lemons: Gun-Totin’ HEAVILY ARMED Left-Wingers Demonstrate at the Arizona Capitol: Is Bloodshed on the Horizon?

“I’m just going to warn you that we’re not responsible for anything that might happen to that phone,” threatened the armed leftist.

It’s not hard to see how civil war will erupt. The right think using force to protect against destroying a persons property is legitimate defense. The left thinks using force to hurt people they label as “fascist” (which is pretty much anyone not them) is legitimate. One day an armed leftist is going to try and smash a “fascists” phone and he will be met with resistance.

These progressive goons with guns tried to block me, but I did film some them driving away. The denouement of this encounter was especially ludicrous, as you will see if you watch the video that I have posted.

All apologies for my fumbling with my iPhone at the end. When the sun is beaming down on you, it’s somewhat difficult to find the “Finish” button.

I made a comment on the video that this entire event proved that the far left can be as hostile to the First Amendment as the far right.

And that’s coming from a big, fat liberal.

In hindsight, it occurs to me that if a left-wing militia and a right-wing militia, such as the ALG, cross paths at an future demonstration, there very easily could be bloodshed.

Both sides are loaded for bear. And I get the feeling both sides can rationalize their behavior after the fact, even if it comes down to killing someone.