The U.S. National Counterintelligence and Security Center (NCSC) has stressed in its latest report that hacktivists and “public disclosure organizations” like WikiLeaks pose a “significant threat” similar to that of Islamic State and Al-Qaeda terrorists, as well as Russia, Iran, and China.

“Ideologically motivated entities such as hacktivists, leaktivists, and public disclosure organizations” pose “significant threats” to the U.S. at the same level as non-state terrorist organizations, according to the report from the Office of the Director of National Intelligence’s biannual National Counterintelligence Strategy.

Although the report fails to mention WikiLeaks by name, it references “unauthorized disclosures of US cyber tools” and “public disclosure organizations.” In others words, the CIA hacking tools released under Vault 7 and Vault 8 and the NSA surveillance dragnet revealed by whistleblower Edward Snowden.

In 2017, the U.S. Senate considered a bill that would have classified WikiLeaks as a “non-state hostile intelligence service” bundled as part of the 2018 Intelligence Authorization Act. Presumably, that classification would authorize the use of force against WikiLeaks.

Those same words were echoed by former CIA director and current Secretary of State Mike Pompeo during the same year.

“It’s time to call out WikiLeaks for what it really is: A non-state hostile intelligence service often abetted by state actors like Russia,” Pompeo said at the time.

The NCSC argues that leaks “open up new opportunities for adversaries to use information as a strategic resource in achieving their economic security aims, and exert leverage over their competitors.” The report also insinuates that “emerging technologies” like AI, encryption, and the Internet of Things will benefit U.S. adversaries more than the U.S.

“The United States is facing increasingly aggressive and complex threats from foreign intelligence services, as well as state and non-state actors,” said William Evanina, director of the National Counterintelligence and Security Center.

The NCSC also indicated that Russia and China are using “all instruments of national power to target the United States.” Cuba, Iran, and North Korea were referred to as “significant threats” on the same level as terrorists, hacktivists, and “transnational criminal organizations.”

This comes as WikiLeaks founder and journalist Julian Assange is set to face trial for extradition on February 24 for publishing documents that exposed corruption and U.S. war crimes. Protests are planned all over the world as the future of press freedom lies in the outcome of just one man’s case. 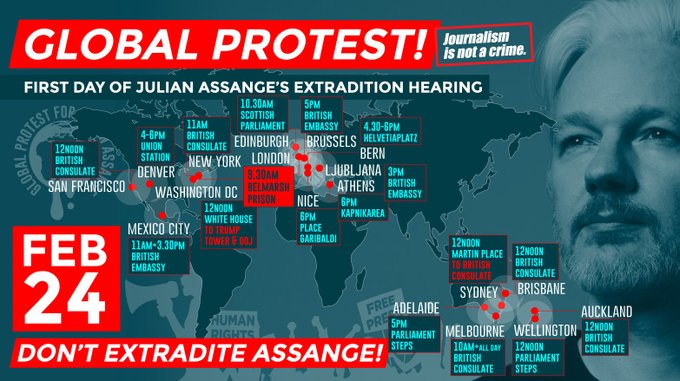 Last year in April, Assange was dragged out of the Ecuadorian Embassy in violation of 2 UN rulings following the withdrawal of his asylum status by the Ecuadorian government.

Assange faces 175 years in the United States if convicted of exposing war crimes and various corruption within the United States, 17 charges of which are under the Espionage Act. In total, Assange faces 18 charges including an absurd charge under the CFAA for “computer hacking” by helping his source, Chelsea Manning, protect herself against being discovered to leak him information.

We are now watching as not only our press freedoms are eroded but those who seek to expose corruption are being labeled as terrorists.