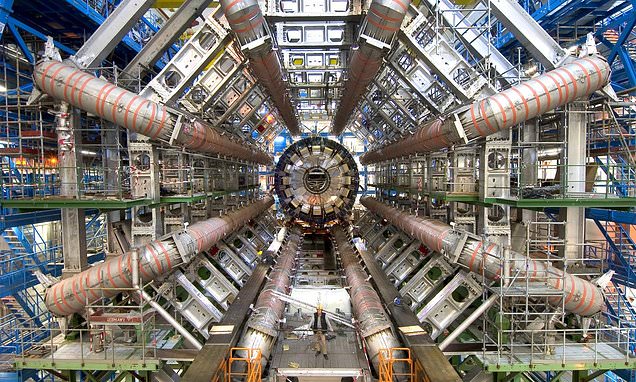 Firing up the nearly 17 mile-long LHC under Switzerland is a complex process, requiring everything to ‘work like an orchestra’, especially after the extended shut down due to Covid-19.

The Large Hadron Collider (LHC) has been fired up again after a three year break for maintenance and upgrades – with the first beam sent around the tunnel just before 10am BST this morning.

The LHC works by smashing atoms together to break them apart and discover the subatomic particles that exist inside them, and how they interact.

CERN, the European Organization for Nuclear Research, shut down the collider in 2019, so that it could carry out work to make the instruments more sensitive.

This will give researchers a higher resolution view inside atoms – capturing data 30 million times per second – and allow more runs.

Firing up the nearly 17 mile-long LHC is a complex process, requiring everything to ‘work like an orchestra’, especially after the extended shut down due to Covid-19.

‘It’s not flipping a button,’ explained Rende Steerenberg, in charge of control room operations at CERN in Switzerland, where the collider control room is based.

‘This comes with a certain sense of tension, nervousness,’ he explained, adding that a lot can go wrong, including obstructions in the tunnel and issues with magnets.

Particle physicists hope the upgrades will help them discover a new fundamental force of nature, to add to the four basic forces – gravitational, electromagnetic, strong, and weak – and help explain the underpinnings of the universe.

Another hope is that the resumption of collisions will help in the quest for so-called ‘dark matter’ that lies beyond the visible universe and makes up most of the matter in the known universe, according to researchers.

“Mike Lamont, CERN’s Director for Accelerators and Technology, said the LHC will operate at an even higher energy…”