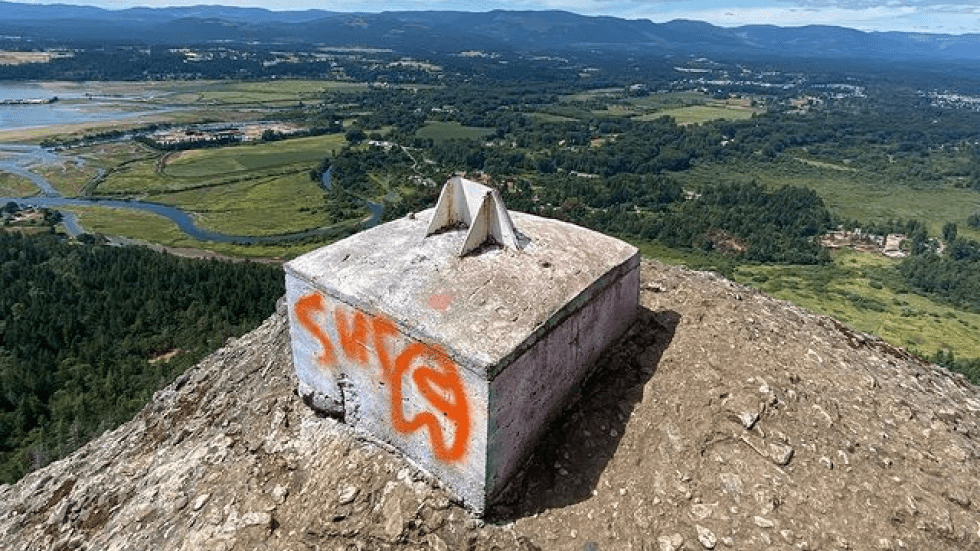 A large white cross that stood on a popular mountaintop lookout point on Canada’s Vancouver Island for decades was cut down and removed at some point in the last week – and some have called for it to be replaced by a totem pole.

A large white cross that stood on a popular mountaintop lookout point on Canada’s Vancouver Island for decades was cut down and removed at some point in the last week – and some have called for it to be replaced by a totem pole.
Over the weekend, photos circulated on social media showing only the concrete base and a small lump of metal remaining at the cross’ site on the summit of Mount Tzouhalem, which overlooks the Cowichan Valley on Vancouver Island near the province of British Columbia.

The 40-hectare site, which has belonged to the Nature Conservancy of Canada since 2009, falls within the Chase Woods Nature Preserve in the “heart of the traditional territory of the Cowichan Tribes.”

No one has claimed responsibility for removing the cross, but social media users were quick to speculate that it was a response to recent discoveries of unmarked graves at former residential school sites, including on the nearby Penelakut Island earlier this month.

On July 8, representatives of the Penelakut tribe confirmed it had found over 160 “undocumented and unmarked” graves on the island, which once housed a residential school dubbed ‘Canada’s Alcatraz’.

According to North Cowichan Mayor Al Siebring, the cross was “deliberately removed” after being cut from its base using a metal grinder. He told the CHEK news outlet that the cross was an “important community monument.”

“I’m sure that there will be discussions with Cowichan Tribes and local First Nations and the conservancy in the weeks ahead, as we try to figure out what to do moving forward,” he told the outlet.

In recent months, there have been acts of vandalism involving Catholic churches and statues of various Canadian historical figures across the country as part of an outpouring of public anger over the discoveries of the mass graves.

However, in a private post on Facebook, Siebring reportedly urged people not to lump the removal of the cross together with other acts of vandalism until the motive is known.

“In our present cultural context, that’s where our minds go,” he wrote, according to the CBC network.

Siebring told CHEK news that the North Cowichan/Duncan Royal Canadian Mounted Police is investigating the disappearance of the cross.