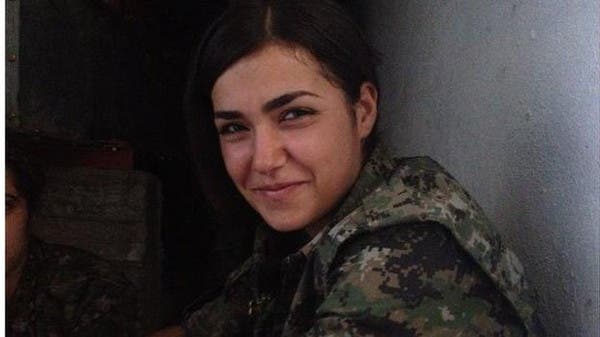 A Syrian Kurdish female combatant, who appeared on a BBC report in September, shot herself with a last bullet during fighting with militants of the Islamic State of Iraq and Syria (ISIS) last week, according to media reports.

Ceylan Ozalp, 19, was reportedly surrounded by ISIS fighters near the Syrian Kurdish city of Kobane also known as Ain al-Arab. After she run out of ammunition Ozalp said “goodbye” over the radio and spent her last bullet on killing herself.

Also read: Biden apologizes to UAE for remarks about ISIS

The reports of her suicide, which follows the beheading of seven men and three women by ISIS in Kobane earlier this week, took social media by storm and appeared in several Turkish news websites such as the daily Radikal.

But other reports suggested Ozalp, also known as Diren –which means “resist” in Turkish, never left the northern Syrian town of Jezaa, which is still under the Kurdish control, according toInternational Business Times.

Al Arabiya News Channel could not independently verify the authenticity of the report on her suicide.

During her interview with the BBC last month, Ozalp said: “We’re not scared of anything…We’ll fight to the last. We’d rather blow ourselves up than be captured by IS (ISIS).”

“When they see a woman with a gun, they’re so afraid they begin to shake. They portray themselves as tough guys to the world. But when they see us with our guns they run away. They see a woman as just a small thing. But one of our women is worth a hundred of their men,” Ozalp told the BBC.

Like Ozalp, many Syrian Kurdish women have joined the Syrian Kurdish People’s Protection Units (YPG), an offshoot of the guerrilla group, the Kurdistan Workers’ Party (PKK). Pictures of these Syrian Kurdish female combatants carrying their Kalashnikovs, or those of their Kurdish Iraqi counterparts – the Peshmergettes – stand out as a striking anomaly in the region’s often male-dominated conflicts.

Several reports accuse ISIS of using female hostages as sex-slaves, often citing stories of Yazidi women – or other minorities – being married off to ISIS fighters.

The United Nations last week said ISIS has committed mass killings, kidnapped women and girls and used them as sex slaves and employed children as fighters, in systematic violations that may amount to war crimes.

In a report based on nearly 500 interviews, the United Nations also blamed air strikes carried out by the Iraqi government for “significant civilian deaths,” by targeting villages, a school and hospitals in violation of international law.

U.N. High Commissioner for Human Rights Zeid Ra’ad al-Hussein said: “The array of violations and abuses perpetrated by ISIL (ISIS) and associated armed groups is staggering, and many of their acts may amount to war crimes or crimes against humanity.”