It has been just over a day since KickassTorrents (KAT) was shut down by the U.S. Government, following the arrest of the site’s alleged owner. While the official site is still offline mirrors and copies are being launched left and right, with some misleadingly claiming to be an “official” resurrection of KAT.

With an active community and millions of regular visitors, KickassTorrents has been the most used torrent site for quite some time.

This ended abruptly earlier this week, following the arrest of its alleged founder in Poland. A criminal complaint from the U.S. Government revealed that entire operation had been compromised by the Department of Homeland Security.

Starting a few hours ago, the first Kickass domain was signed over to the U.S. authorities. Others are expected to follow during the days to come.

Kickass.to now displays a seizure notice, which means that the associated domain registry was quick to respond to the U.S. warrant. People who visit the Kickass.to address today will see the following banner, specifically tailored for KAT. 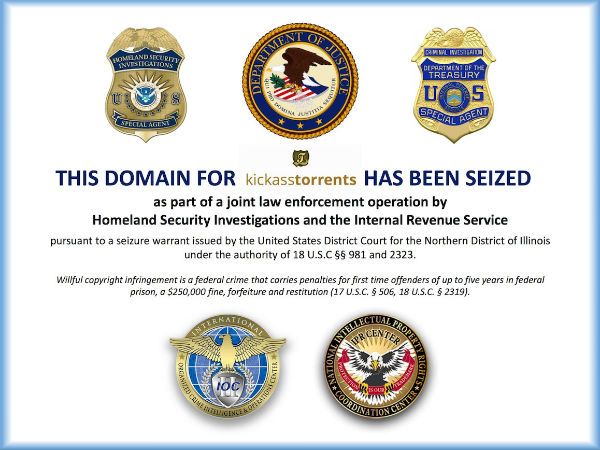 As expected, the U.S. authorities are not the only ones to ‘lift’ KAT’s logo, many others are doing the same, but for a different reason.

Shortly after KAT went offline dozens of people began promoting mirrors and copies of the site. Some are just trying to keep lost files accessible, but there’s also a group trying to take over the brand, similar to the efforts seen following YIFY’s demise.

For example, the operator of Kickass.la sent an email to several reporters promoting a new KAT address. In a follow-up, we were told that the site is an “official backup,” and that a copy of the database is in their possession.

However, the site appears to be little more than a partial copy and the person behind it later admitted that they are not related to KAT.

Only adding to the confusion are the many other copies and alternatives claiming to be the official resurrection of KAT. Some even advertise themselves as such, but most have been available for a longer time as proxy/mirror sites.

Kickasstorrents.to, for example, has been around for a long time, hosting cached pages of the original site. The latter is also true for others, such as Dxtorrent.com. But in any case, there is no true backup with freshly added content available.

Another mirror that has been widely discussed is kickasstorrents.website (which is NOT a project of Isohunt.to, as some reports suggest).

Unlike others, the people behind this site are very clear about the fact that they are not related to the original KAT team. Their copy currently lists torrent files from the past one and a half years, but like other mirrors it doesn’t have a working forum or upload functionality.

“It’s not perfect but if users need to save and archive something it’s time. We don’t know how long it can last, but at least it’s something,” the site’s operator told TorrentFreak.

The people behind the site, who describe themselves as a group of individuals who stand for freedom of the Internet, also launched a petition on Change.org calling for the release of KAT’s alleged owner Artem Vaulin.

“We are protesting against violent attack on our right to share information and arrest of Kat.cr founder Artem Vaulin. Our freedom to share is the human right which Artem Vaulin has been providing to millions of users from all over the world,” they say.

While a notable effort, the banner promoting the cause appears to show a photo of an entirely different Artem Vaulin. The image was removed from the petition after we pointed this out, but it’s still present in the manifesto at the time of writing and being shared in news articles and on social media.

What is clear is that former KAT users are grasping at straws to get their old community back. While mirrors and copies do look like their old home, without a working forum and new content they don’t provide much of an alternative.

For now, people are probably better off not trusting any “KAT resurrection” claims. The chance of getting your password stolen is higher than finding a site with a true backup of the user database.