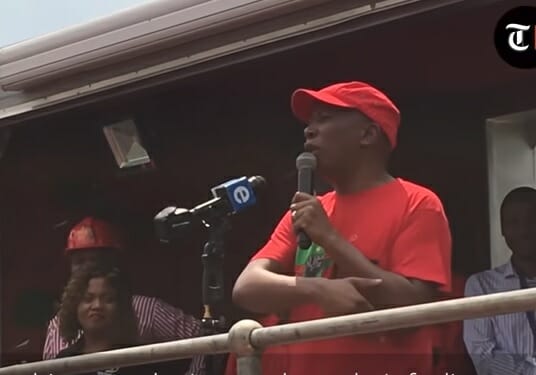 In 2011 South Africa youth leader Julius Malema told his supporters that the white farmer’s land must be shared by all black Africans. Malema was arrested for playing “Kill the Boer (white man)” song at his rallies. Julius Malema later founded the Economic Freedom Fighters, a South African political party. In February Malema called for […]

Malema noted that white people who participated in the public participation process of the committee, whether rich or poor and even the landless, were in unison in opposing expropriation of land without compensation. He said this was because when white interests and privilege were threatened, white people protected each other.

“Why would people think alike like that, if it is not an issue of racism and privilege which seeks to perpetuate landlessness among those who were conquered by criminals who came into our country and took our land?”

He said that among black people, and Africans in particular, there were different views as they did not come from a process that sought to isolate anyone. Rather, he said, it came from a background that sought to win a debate through an honest engagement.

“Here you have got a group of people who 90% of them vote for the same party. This is white privilege, this is in defence of white privilege which seeks to perpetuate landlessness among our people,” said Malema.

He called for black unity, saying this was very important when it came to the matter of land.