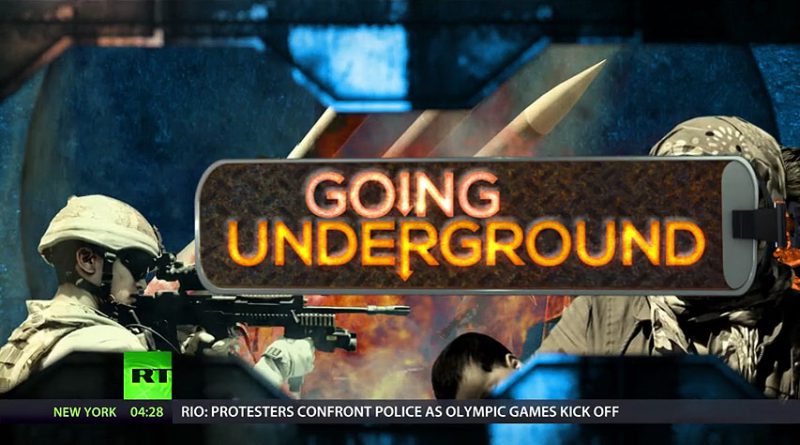 Afshin Rattansi goes underground with Julian Assange. We talk to the founder of Wikileaks about how the recent DNC leaks have no connection to Russia. Plus what are Hillary Clinton’s connections to Islamic State, Saudi Arabia and Russia?

Here are some of Assange’s most insightful lines:

“The US government at the times when Hillary Clinton was in charge of the foreign policy did use Libya as a conduit to get arms to jihadists in Syria. That is well-established not just by a range of raw materials but also by … investigative reporters in the US, some of which were even published in The New York Times.”

“La Farge, which is … giant transnational concrete company was involved in Syria. There are more than 350 La Farge related emails in our Syria emails release. The investigations by Le Monde reveals that they paid ISIS money, taxes for their operations in certain areas, were engaged in a variety of business deals with ISIS.”

“Money from La Farge in 2015 and 2016 went to Hillary Clinton foundation. There is actually a long-term relationship between La Farge and Clinton; she was a member of the board.”

“What [Hillary Clinton] is attempting to do is to conflate our publications of pristine emails … and whatever hacking has occurred of the DNC or other political organizations in the US by a range of actors.”

In this batch of documents … there are claims that metadata after someone completed a document to PDF conversion, the language of the computer that was used for that conversion had been Russian. It remains circumstantial evidence – some Russians were involved or someone who wanted it to look like Russian was involved with these other media organizations. That is not the case for the materials that we have released.

Clinton accusing Donald Trump of having ties with Russia

“There is a much deeper connection on record with Hillary Clinton and Russia than we are presently aware of with Donald Trump.

One particular instance is the approval by Secretary Clinton of selling 20 percent of the US-Iranian reprocessing rights to a Russian company to be exported to Russia. At that time, a large donation was made by those Russian interests to the Clinton foundation.”