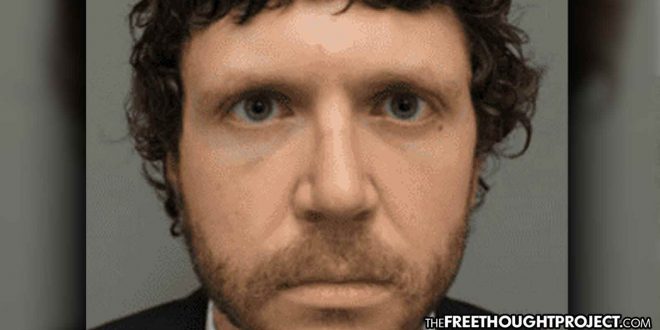 This son of a judge was originally facing 250 years behind bars for the 45 felony charges against him, however he received zero.

Butler County, PA — In the land of the free, there are two sets of justice systems — one for all those connected to that system, and one for everyone else. Time after time, we’ve seen police officers and politicians alike accused of terrible crimes and they escape with little to no jail. As the following case illustrates, even family members of the connected class are extended this privilege and escape accountability for even the most heinous of crimes.

John Paul Doerr III, 34, pleaded guilty to exploiting children through possessing and distributing a massive amount of child pornography — some of which involved infants. He was facing upwards of 250 years in a cage for the whopping 45 felony counts against him.

However, Doerr happens to be the son of Butler County’s top judge, Thomas Doerr. So, instead of going to jail for the rest of his life, as he should have, Doerr will not go to jail at all. Instead this child predator was sentenced to five years probation, six months house arrest and 15 years on the Megan’s Law registry. According to the sentencing judge, Timothy Creany, the house arrest will be lifted if Doerr gets a job.

Naturally, this special privilege given to a child predator made people upset. As WPXI reported, dozens of people protested Doerr’s sentencing outside the Butler County Courthouse on Friday, saying they believe that father-son relationship had a lot to do with the lenient sentence.

“It’s not fair. He (could have) gotten 252 years behind bars, (but) instead he got probation and house arrest,” said Madison Morgan, a demonstrator. “It’s because of who his father is.”

Doerr was initially arrested after confessing that he downloaded multiple videos, including one with a child as young as 1-2 years old. Investigators tracked him down using the IP address assigned to his computer.

Butler County officials told Channel 11 there was no wrongdoing in the case. The district attorney said he immediately handed Doerr’s case over to the attorney general’s office and that no local judge heard the case.

Authorities brought in an outside judge and prosecutor. That prosecutor said this is a standard sentence, typical for these types of cases.

Though prosecutors claimed he received equal treatment under the law, protesters pointed out that at the time of his arrest, Doerr’s mugshot wasn’t even printed, which is standard for all arrests.

It seems his special privilege started from the get go and now an admitted child predator is free to strike again.

As TFTP reported, this privilege is also extended to the children of police officers. Last year, a 23-year-old man in Indiana pleaded guilty to molesting a 13-year-old foster child living with his family, and was sentenced to just three years of house arrest.

Andrew Taylor is the son of Tim Taylor, the police chief in his hometown of Berne, Indiana. Taylor asked the young girl who had been placed with his family “to perform oral sex on him and she agreed” in October. He then told his father about what he did and turned himself in, according to court documents. Like Doerr, instead of going to jail, he flexed his connections. An injustice indeed.