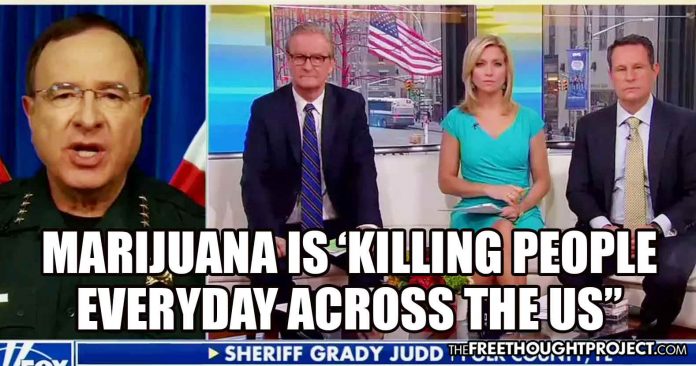 According to the sheriff on Fox & Friends, marijuana “is ruining families and killing people every day across the United States,” and it needs to be stopped.

Fox News is no stranger to hating on weed. In fact, the Free Thought Project has reported on their insane reefer madness several times before. However, on this Monday’s episode of Fox & Friends, the propaganda and utter lies hit a new high—no pun intended.

On Monday, Fox and Friends was covering the story out of Mulberry, Florida in which a 12-year-old kid handed out THC gummies in a gym class at his middle school last week. At least five of his classmates went to the hospital with symptoms one would expect from a child ingesting marijuana—such as stomach pain, dizziness, and nausea.

Local media ran with the story, claiming all the kids were hospitalized and made it seem like it was the end of the world.And, while it is certainly a terrible idea for a child to eat a THC gummy, it is most assuredly not the end of the world—as marijuana has never killed anyone, ever. All the kids are now fine and the child who gave them the gummies faces seven felony charges for possessing and distributing marijuana.

After hyping up fear about the kids eating gummies, the folks at Fox & Friends went on to demonize marijuana in general. As if he had channeled the ghost of Henry Anslinger, Fox & Friends co-host, Brian Kilmeade began spewing ignorant lies and assertions, straight out of the 1930’s.

“No one talks about this — THC is addicting,” Kilmeade said. “I know so many people, they say they were told one thing and they end up getting addicted to it. That is an addicting substance. There is a price to pay for pot.”

Polk County Sheriff Grady Judd then expressed his agreement and went further—claiming that marijuana is literally“killing people every day.”

“There absolutely is a price to pay for pot,” he said. “You know, I spent my entire life in law enforcement, and a lot of it investigating traffickers of drugs, and it is not a minor, nonviolent felony. It is ruining families and killing people every day across the United States and we stand here in denial thinking it is not a gateway drug.”

But the sheriff is the one in denial. Does sheriff Judd think that the countless epileptic children whose lives CBD and THC have saved have had their families ruined? Unfortunately, the only people ruining lives over marijuana are the ones kidnapping and caging people for having it—like sheriff Judd.

Moreover, there have been a myriad of studies proving that pot is not a gateway drug.

But when one looks past the surface of this claim, it becomes downright silly. It just so happens that 99% of these so-called illicit drug users could have also tried coffee, soft drinks, candy, or milk before moving on to harsher substances. By this same definition, caffeine could be referred to as a gateway drug.

Regardless of these facts, the dolts at Fox & Friends continued their insidious and untrue assault on the plant.

“You don’t start on cocaine — you probably start with marijuana and it leads to other things, right?” asked host Ainsley Earhardt.

“That is absolutely right,” Judd falsely replied. “And still today we have a meth problem across this state and country. If someone is in possession of meth, they’re in possession of marijuana because it kinda cuts the edge of the meth. And then they use the marijuana and the meth and they go out and kill themselves or overdose or kill someone else.”

Again, this is not true as marijuana has shown to reduce crime and dependence on other harsher substance. As TFTP has reported, marijuana is actually an exit drug as the promise it shows in curbing opioid addiction as well as relieving symptoms of PTSD and depression —far better than dangerous pharmaceuticals—is evidence of this.

As TFTP reported, a JAMA Internal Medicine study looked at ten years of data in all 50 states, concluding that states with medical cannabis laws had significantly lower rates of opioid overdose mortality.

Sadly, these people aren’t making a comedy show and they either really believe this utter horse manure spilling from their mouths, or they are merely justifying the war on drugs to maintain their profit streams from enforcement of the drug war and big pharma’s monopoly on the sale of drugs. Either way, talk like this is incredibly dangerous and highlights just how far we have to go to end this repressive, violent, and corrupt war on drugs.

Please share this story with your friends and family so we can help to expose this madness for what it is, police state propaganda.

WARNING: The conspiratorial stupidity and mania surrounding the prohibition of cannabis are massively infuriating.

-"addicting"
-"not a minor, non-violent felony"
-"killing people every day across the United States"
-"a gateway drug"
-used by meth addicts to help "kill themselves, or overdose, or kill someone else" pic.twitter.com/euvjB4h3Dr