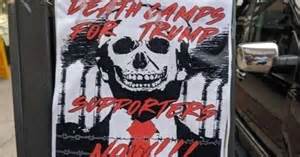 New York City– Fliers were posted on Tuesday calling for “Death Camps to all Trump Supporters.”

New York City is becoming more communist by the day.

The photos were taken by a member of the Shock Theater collective, a group that lays on haunted house tours and horror scenarios, but the company said it was not responsible for creating or posting the fliers.  […]

Read the full story from The Gateway Pundit