Just days after the United States began using Apache helicopters against the Islamic State group in Iraq, ISIS has responded by producing a guide to shooting down the iconic aircraft. The guide, which has been circulating on social media, explains in minute detail how to use portable surface-to-air missiles, such as the Russian-made SA-16 and SA-18 and the American FIM-92 Stinger, against the attack helicopter.

The Stinger was heavily used during the Soviet invasion of Afghanistan in the 1980s, when the shoulder-fired missiles provided by the U.S. to mujahideen fighters proved very effective at shooting down Soviet helicopters. They also saw use against Russian aircraft during  the first and second Chechen wars, which took place from 1994 to 1996 and 1999 to 2009, respectively. The guide will serve as a reminder for the ISIS fighters who took part in those conflicts before joining the ranks of the Sunni extremist group in Iraq and Syria. For new recruits, the guide is a detailed primer on how to target successfully the Apaches by defeating their countermeasures.

The introduction of the Apaches in Iraq comes at a time when ISIS is being buoyed by the major advances it is making in Syria, where it is close to capturing the strategically important town of Kobane, and Iraq’s capital Baghdad, where ISIS has come within shooting distance of the city.

But perhaps what makes the use of the aircraft most significant is that it represents a significant escalation of the risk being taken by U.S. forces. 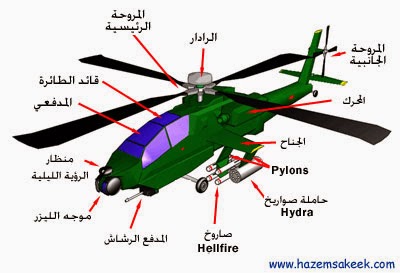 Translated with google translate
Plane Apache dedicated to attack and destroy armored targets and regular vehicles and bunkers, the mass of air defense and Alrdarat and troop concentrations, and the tasks Glaring air boot and fire support, ambushes and significance of the goals for Azaria to secure: the work of bombers armed with weapons Player and Tstata work at low altitudes and high ability to maneuver in weather conditions the bad and the day and night.
Considered Apache helicopter with two seats behind each other, the pilot in the back seat and aimed in the front seat, and enjoy the protection of a good crew where supply sheet metal for additional protection from small arms fire and shrapnel as well as supplied modes of navigation and sophisticated detection systems and to identify and prosecute targets and payment by day and night, also can carry a variety of weapons to help them perform various tasks assigned to them.
The best way to drop the Apaches are using shoulder-fired missiles, and there are two models of different effective missile comes in the forefront of American and Russian missiles Stngr modern model of Sam Sam 16 and 18, a very sophisticated two models have proved highly effective in Chechnya.
◘ basic principles for the use of portable missiles ◘
◘ determine the launch area: preferably be high: the surface of the building or a hill where some of the trees with a solid platform to prevent the emergence of dust after all.
◘ determine the plane closer to the expected hostile.
◘ determine distance ever Great point Allam ground known in advance so that no more than 1500 m line of sight from the plane, and where not to leave the pilot a chance to escape from the rocket after launch, and preferably all the moment the plane hostile firing a missile at a target a friend, where the pilot and ramie preoccupied with pursuing the goal that never was it, that the rise of anti-aircraft missiles to launch is 1220 but it can launch missiles at low altitudes up to a height of 50 m.
◘ must not exceed the time of payment and all about 5-10 seconds of where the aircraft is likely to be supplied with Pick can be sensitive to the launch, and the launch is when you hear the voice of the highest whistling rocket.
◘ process should take place at all towards the front of the plane and not towards the stern where the thermal center of jamming highly effective.
◘ must consist crew ever: Rami + router and a minimum so as not to increase the time presence in the launch area for 30 seconds max.
◘ preferably with a high explosive material in the brooder after the rocket launch and detonate it, so you do not have an impact to the vehicle at all, and should not be less material than 300 grams per cylinder within the missile launch.
◘ when there is more than one missile, and this is best must be absolutely interval of no more than 10 seconds between the launch and the other and a rapid release of ramie and other up to 200-500 meters, and so is set to throw the signal to wireless or voice, or when you hear the first missile, and apply the same procedures previously mentioned after all.
◘ If the plane has been infected from the first release where the plane was seen smoke still must inevitably fly the rocket launch to confirm the other dropped.
◘ favors a sniper or more in the region which we expect by the fall of the plane, where they are shooting at the pilot and ramie if they tried to jump out of the plane.
◘ inevitably expect the arrival of helicopters and other quickly to the drop zone and this is an opportunity not repeat to drop other hostile aircraft, especially when there are a sufficient number of missiles 4/6 missile.
◘ great confidence in God and composure and find out all the details of the weapon and know that this process will cause a disaster for the enemy crash pride, are the reasons for the great and essential to achieve accuracy in the throwing and the incidence of hostile helicopters.
◘ prefer to find areas imaginary is by show of smoke and dust and be far away from residential areas to the attention of the enemy it so thought as areas at all and would prefer to be areas of booby-trapped with improvised explosive devices in large quantities and more than a bomb until landing the biggest losses the troops that will be combed those areas.
Google Translate for Business:Translator Toolkit