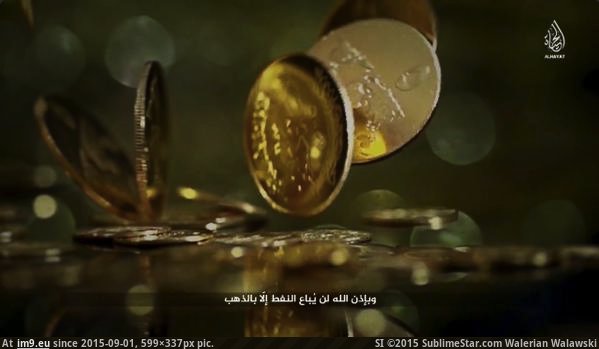 “Islamic State (Isis) revealed its new currency in a one-hour-long video entitled The Rise of the Khilafah and the Return of the Gold Dinar on Saturday, 29 August. The group said that the creation of the currency will help to break the “enslavement” of capitalism underpinned by the US dollar.”

“The group is making moves to pay those within the caliphate with its own currency as its fighters are still paid in US dollars. The group says that one new dinar coin will be 21-carats, weigh 4.25 grams and be worth the equivalent of $139, as it will be made out of gold.”

“The narrator also says that the new currency will bring down “the capitalist financial system of enslavement, underpinned by a piece of paper called the Federal Reserve dollar note”. The group does not outline how the new currency will be circulated or how it will replace other currencies within their caliphate.”