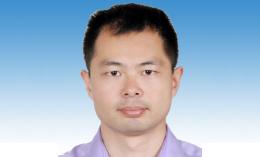 “In human history, we have been chasing infectious diseases one after another,” says Zhou, “but bats appear to be a ‘super-mammal’ to these deadly viruses.”

Source: Is This The Man Behind The Global Coronavirus Pandemic? | Zero Hedge

In light of growing speculation, most of it within less than official circles, that the official theory for the spread of the Coronavirus epidemic, namely because someone ate bat soup at a Wuhan seafood and animal market… 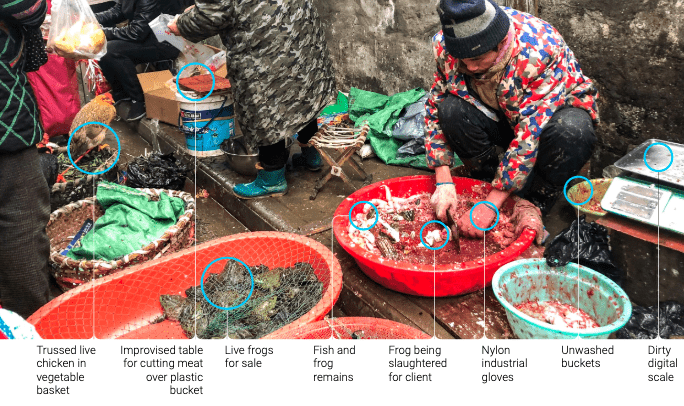 … is a fabricated farce, and that the real reason behind the viral spread is because a weaponized version of the coronavirus (one which may have originally been obtained from Canada), was released by Wuhan’s Institute of Virology (accidentally or not), a top-level biohazard lab which was studying “the world’s most dangerous pathogens“, perhaps it would be a good idea for the same Wuhan Institute of Virology to remove the following “help wanted” notice, posted on November 18, 2019, according to which the institute is seeking to hire one or two post-doc fellows, who will use “bats to research the molecular mechanism that allows Ebola and SARS-associated coronaviruses to lie dormant for a long time without causing diseases.”

The right candidate will:

The full job posting, which can still be found on the Wuhan Institute of Virology website can be found here (and screengrabbed below as it will be gone within a few hours). 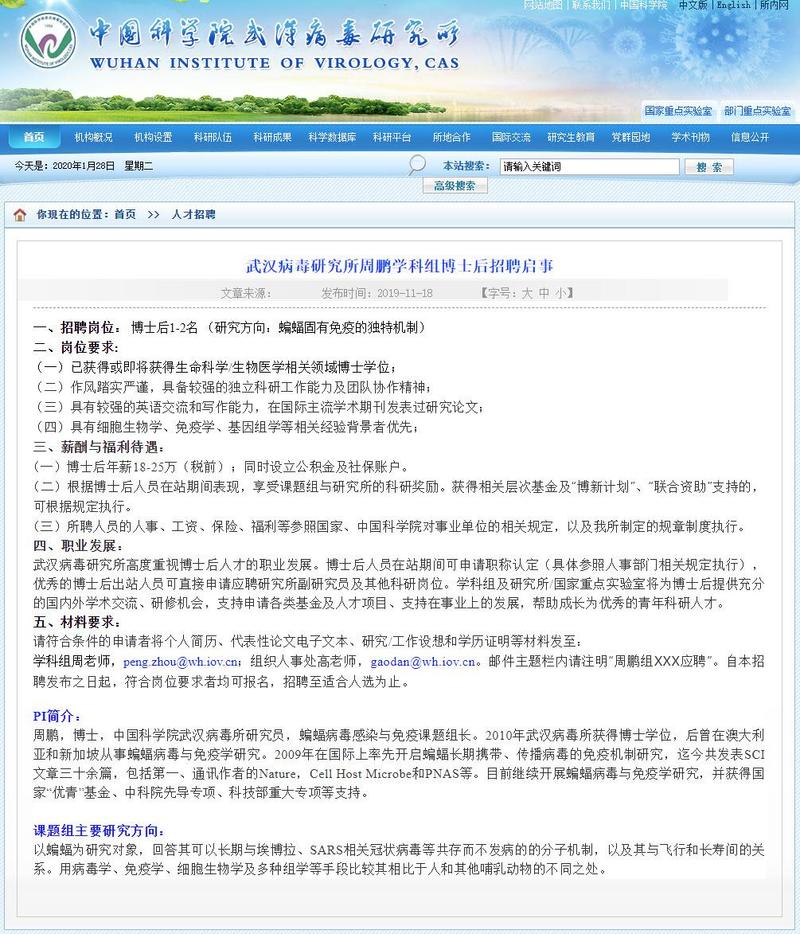 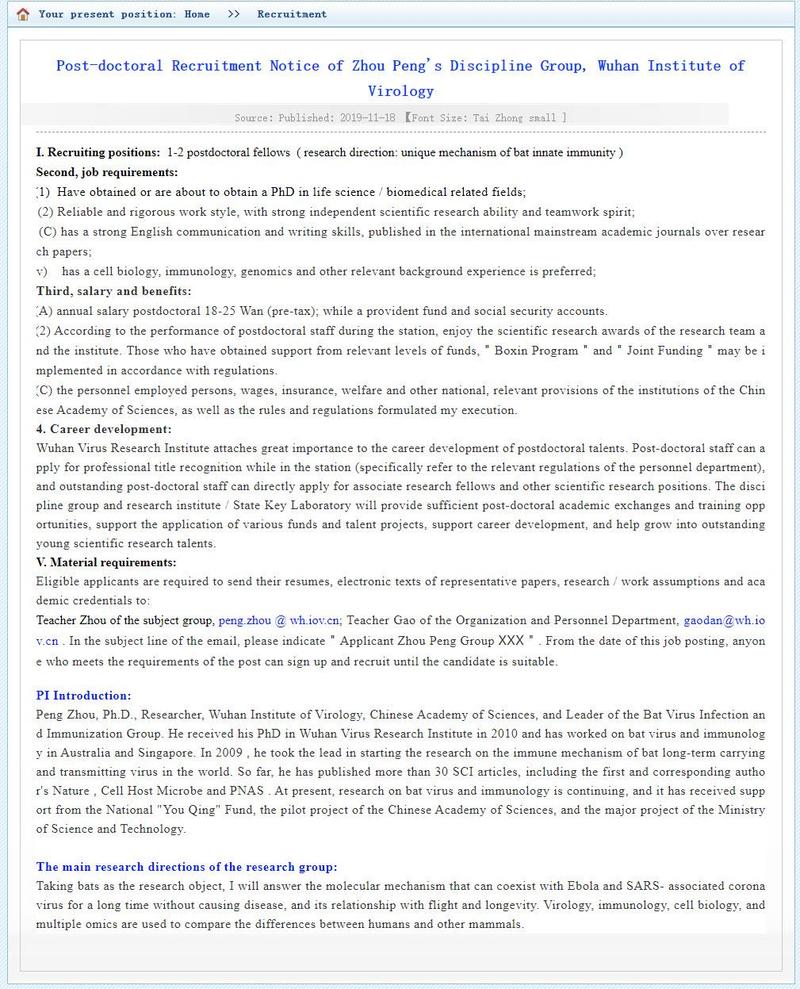 Why is this notable? Because as it turns out, this is a job posting for the lab of Dr. Peng Zhou (周鹏), Ph.D., a researcher at the Wuhan Institute of Virology and Leader of the Bat Virus Infection and Immunization Group. Some more on Zhou’s background from the Institute (google translated):

He received his PhD in Wuhan Virus Research Institute in 2010 and has worked on bat virus and immunology in Australia and Singapore. In 2009 , he took the lead in starting the research on the immune mechanism of bat long-term carrying and transmitting virus in the world. So far, he has published more than 30 SCI articles, including the first and corresponding author’s Nature , Cell Host Microbe and PNAS . At present, research on bat virus and immunology is continuing, and it has received support from the National “You Qing” Fund, the pilot project of the Chinese Academy of Sciences, and the major project of the Ministry of Science and Technology.

Below is a list of several recent papers published by Dr. Zhou

Which brings us to the punchline: courtesy of the Wuhan institute of virology, here is a press release from Dr. Zhou’s lab titled “How bats carry viruses without getting sick”:

Bats are known to harbor highly pathogenic viruses like Ebola, Marburg, Hendra, Nipah, and SARS-CoV, and yet they do not show clinical signs of disease. In a paper published in the journal Cell Host & Microbe on February 22, scientists at the Wuhan Institute of Virology in China find that in bats, an antiviral immune pathway called the STING-interferon pathway is dampened, and bats can maintain just enough defense against illness without triggering a heightened immune reaction.

“We believe there is a balance between bats and the pathogens they carry,” says senior author Peng Zhou. “This work demonstrated that in order to maintain a balance with viruses, bats may have evolved to dampen certain pathways.”

In humans and other mammals, an immune-based over-response to one of these and other pathogenic viruses can trigger severe illness. For example, in humans, an activated STING pathway is linked with severe autoimmune diseases.

“In human history, we have been chasing infectious diseases one after another,” says Zhou, “but bats appear to be a ‘super-mammal’ to these deadly viruses.” By identifying a weakened but not defunct STING pathway, researchers have some new insight into how bats fine-tune antiviral defenses to balance an effective, but not an overt, response against viruses.

The authors hypothesize that this defense strategy evolved as part of three interconnected features of bat biology: they are flying mammals, have a long lifespan, and host a large viral reservoir.

And just in case, here is a google-translated press release from Jan 18, 2019 describing the achievements of Dr. Peng Zhou:

Wuhan has the first person in the global bat immunity research: “I rushed forward with a sword”

Changjiang Daily Financial Media May 4 hearing last month as they tied for first author made a “natural”, in recent years, the Chinese Academy of Sciences Wuhan virus after 80 young researchers Zhou Peng has been in the “natural”, “American Academy of Sciences ”And other international authoritative magazines published 28 papers, becoming academic stars. In an interview with reporters recently, he introduced that young scientists do not rely on genius to hold, but rely on “super confident”.

It is understood that Zhou Peng is the pioneer of global bat immune system research. “Bats carry viruses but do not get sick. They have not been researched by scientists before, and certainly have specificity different from other species, but this is like you know the beginning and Ending without knowing how the story happened. “ After more than 10 years of research, Zhou Peng discovered that an antiviral immune channel called “interferon gene-stimulating protein-interferon” in the bat’s body was inhibited, so that the bat could just resist the disease without triggering a strong immune response. The results were published in Cells, Hosts and Microorganisms, which aroused the attention of the academic community.

Zhou Peng, a student of undergraduate bioengineering, experienced SARS (Severe Acute Respiratory Syndrome) in his junior year, which made him interested in the virus: “A small virus makes the world mess.” He was admitted to the Wuhan Institute of Virology of the Chinese Academy of Sciences at the postgraduate level, and studied under Shi Zhengli, a bat expert. Focusing on the virus carried by the bat, then I was wondering if the bat’s immune system is special. ”

After graduating from the PhD, he entered the Australian Animal Health Laboratory and became the first person in the global bat immunity research. “I went through 4 years of trial and error, groped in the dark, and hit the South Wall numerous times. I still remember a ‘darkest moment’ ‘In the local cold winter, I was holding the frostbite knee, sitting at the beach, and asking myself why this was the case.’

He began to learn Australian jokes and inspired himself. In 2016, during postdoctoral studies at Duke University-National University of Singapore Medical School, he was concerned that a certain interferon in bats is always maintained at a high level. This paper became the cover article of the Proceedings of the National Academy of Sciences, “Bat Immunity “This door was opened, and more and more people in the world are paying attention to this field.” Our generation, when we were in college, watched “The Forrest Gump” and “Redemption of Shawshank” and taught us stupidity and perseverance. I I feel like I am carrying a sword and rushing forward. ”

After returning to China in 2016, Zhou Peng returned to his alma mater to become a little-known young researcher. “In the long run, bats carry the virus without getting sick. It is hoped that humans can learn how to fight the virus, but this is still far from industrialization. Far, the road ahead is long, and we must remain ‘super confident’ and continue to move forward. “(Reporter Li Jia correspondent Chen teased Li Li intern Luo Yameng)

And here is the man, the myth, the bat-god himself: Peng Zhou.

Peng Zhou, Ph.D., researcher, team leader of bat virus infection and immunity. He successively obtained bachelor’s and doctoral degrees from Henan University (2004) and Wuhan Institute of Virology, Chinese Academy of Sciences (2010). During his doctorate, he was sent to the Australian Animal Health Laboratory for study. He then carried out research work at Duke-Nus Medical College in Australia and Singapore. He has long been engaged in the research of new virus epidemiology and bat antiviral immunity, revealing that bats carry SARS, MERS, and Ebola for a long time but do not have their own immune mechanisms.