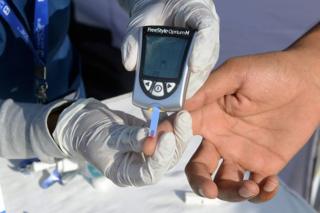 A new study says half of people affected by type 2 diabetes will not have access to insulin by 2030.

Source: Is the world heading for an insulin shortage? – BBC News

It has been called the scourge of urban life. Poor lifestyle and obesity have led to a surge in type 2 diabetes, a condition that occurs when the body cannot produce enough insulin to regulate blood sugar levels.

Now scientists say that millions of people around the world with diabetes may not be able to access insulin over the next decade and more.

Some 400 million people – more than half of them in China, India and the US – aged 20 to 79, are living with type 2 diabetes, which is the most common form of the disease. Their numbers are expected to climb to more than 500 million by 2030. (The other form is Type 1 diabetes in which the body attacks its own insulin-producing pancreatic cell.)

A new study in the Lancet Diabetes and Endocrinology journal says nearly 80 million people with the disease will require insulin by 2030 as the demand for the drug is projected to rise by 20% by then. But around half of those who need it – possibly the majority in Asia and Africa – will not be able to get it. Already, one in two people with Type 2 diabetes do not have access to the insulin they need.

“Access is defined as the combination of availability and affordability,” Dr Sanjay Basu from Stanford University in the US, who led the research, told me. “In addition to prices, it also means that a supply chain must be in place that can handle and safely distribute a refrigerated drug and the various supplies like sterile needles and syringes that must go along with it.”

Why has insulin, a 97-year-old drug, which was hailed as one of the first “wonder drugs” of the 20th Century, remained consistently expensive over the years?

One reason, say scientists, is that three multinational companies – Novo Nordisk, Eli Lilly and Company, and Sanofi – control 99% of the $21bn (£16bn) global insulin market in terms of value and 96% in terms of volume. (The same companies control the entire US market.)

And although more than 90 of 132 countries have no tariffs for insulin, the drug still remains expensive for many – taxes, steep mark-ups, and other supply chain costs have pushed up the drug price and hurt affordability.

Even in the US, where more than 20 million people have been diagnosed as diabetic, out-of-pocket expenses for insulin increased by 89% between 2000 and 2010. This is true even for adults who are covered under insurance. The price of the drug shot up from $40 a vial to $130 a vial – each vial usually lasts for a couple of weeks at the most.

There are also questions about the availability of the drug.