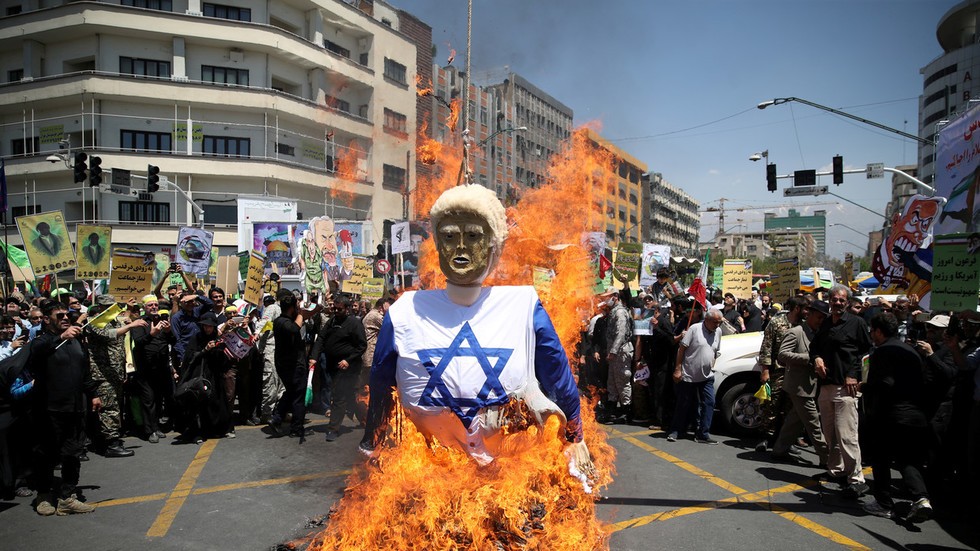 Israel and US civilization in its present state are doomed and will last no longer than one generation, Iran’s Supreme Leader Ayatollah Ali Khamenei has said, promising Iranian students they would see them crumble.

With tensions running high between the US and the Islamic Republic, Khamenei picked up the baton of apocalyptic predictions from US President Donald Trump and prophesied the inevitable oblivion for the Jewish state and the entire American civilization.

Khamenei, who did not elaborate on what would bring down Iran’s two main adversaries, told students in Tehran on Wednesday that they would be alive to witness their doom firsthand.

“You young people should be assured that you will witness the demise of the enemies of humanity, meaning the degenerate American civilization, and the demise of Israel,” the Ayatollah said.

It is not the first time Iran’s most senior cleric has made ominous predictions about the US and Israel. Several years ago, Khamenei said that he hopes the “Zionist regime” will perish within the next 25 years.

Khamenei has been known to call for the deaths of US leaders, such as US President Donald Trump, Secretary of State Mike Pompeo and Trump’s hawkish National Security Advisor John Bolton, who has been a fervent advocate of raining bombs on Iran. The supreme leader noted in February that his incendiary rhetoric was not directed at ordinary Americans.

“It means death to America’s rulers… we have nothing against the American people,” he said at the time.

Iranian leaders might trade verbal barbs with US officials, but Washington has been the one flexing its military muscles at its adversary’s doorstep, so far. It sent a carrier strike group, a missile defense battery and strategic bombers to the region. It is also reportedly planning a massive troop deployment, with recent anonymously-sourced estimates ranging from 5,000 to 120,000 soldiers.

Washington’s saber-rattling has stoked fears of a war, but both sides have so far downplayed the possibility, with the Pentagon claiming its show of force and stream of threats have deterred Tehran’s perceived aggression.

Khamenei previously ruled out a war with the US, saying: “We don’t seek a war, and they don’t either.”