According to its own website, SelectaDNA is “trusted by” the likes of McDonald’s, Royal Bank of Scotland, Shell Oil, and pharmaceutical giant Glaxo Smith Kline.

“SelectaDNA property markers contain thousands of microdots which allow police to identify property at the scene in a matter of seconds,” acceding to the company’s website.

“UV tracers are incorporated in SelectaDNA to make it easy for police to find thieves who have been sprayed with SelectaDNA and property that has been marked.” 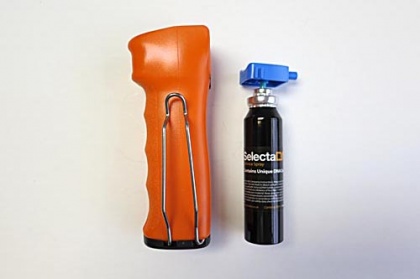 Personal attacks, muggings and worse are committed on an almost daily basis. Certain groups, such as shopkeepers, police community support officers and security guards, are more vulnerable than others. In extreme cases, attacks can be fatal. But you can help prevent such attacks from ever taking place with the police-approved SelectaDNA Defence Spray Kit; an advanced weapon in crime prevention.

Anyone carrying the spray kit is able to mark offenders with a solution of unique DNA code and UV marker that’s invisible to the naked eye and almost impossible to remove.

The solution is easily identifiable under UV light, and irrefutably links criminals with crimes. Knowing that an attack on someone carrying a defence spray kit comes with a higher rate of conviction, criminals are less likely to commit the crime in the first place – drastically reducing incidents of theft and attack.

How to use the SelectaDNA Spray Kit

Simply mount the aerosol in the orange holster and the spray kit is armed and ready to go. Use it in the same way you would any aerosol, such as a deodorant or cleaning product.

Aim the spray kit at the attacker and mark them with discreet, unique DNA from a distance of up to five metres. The DNA clings to clothes and skin for weeks, greatly increasing the chances of conviction.