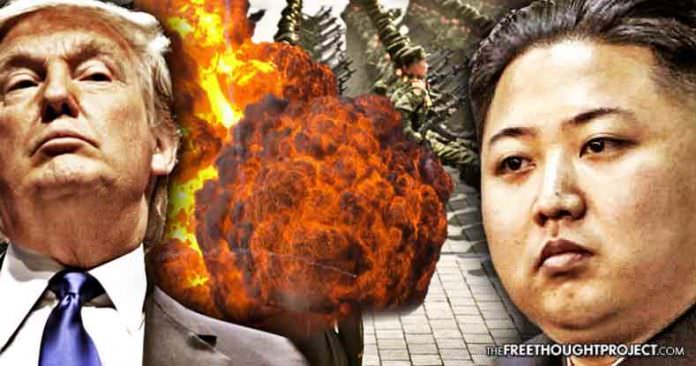 The current tensions and saber rattling with North Korea could be coming to a head—which would inevitably kick off world war III—by as early as March 20, 2018, according to intelligence insider, James Rickards.

Rickards, who has worked closely with U.S. intelligence agencies over the last two decades, was once asked to simulate asymmetric economic attacks on the U.S. financial system and is an expert at escalation scenarios and end games. Rickards notes that we should expect this war in the next 12 weeks, because “the Director of the Central Intelligence Agency told me,” writes Rickards.

The most important financial or geopolitical issue in the world today is a coming war between the U.S. and North Korea, probably in the next twelve weeks.

How can I be so sure about the timing? The Director of the Central Intelligence Agency told me.

In a private conclave in Washington DC on October 20, 2017, CIA Director Mike Pompeo told a small think tank group (including me) that it would be imprudent to assume it would take North Korea more than ‘five months’ to have a reliable arsenal of nuclear-armed ICBM missiles. These could strike U.S. cities and kill millions of Americans.

While Rickards claims could be dismissed as hearsay, they are backed up by recent public admissions from top generals.

“I hope I’m wrong, but there’s a war coming,” Neller told them. “You’re in a fight here, an informational fight, a political fight, by your presence.”

It’s not only US military officials echoing these ominous predictions of war either. Chinese General Wang Gongguang also said that war will be likely before March.

“The war on the Korean Peninsula might break out anytime between now and March next year,” Wang told the Global Times, adding that “China should be psychologically prepared for a potential Korean war, and the Northeast China regions should be mobilized for that.”

As TFTP reported earlier this month, revealing the extreme direness of the situation on the Korean Peninsula, a state-run Chinese media outlet based in a province bordering North Korea and Russia — the Jilin Daily — published a “common sense” guide for surviving a nuclear war.

China is not the only state in Southeast Asia to issue guidelines for surviving a nuclear attack, as both Japan and South Korea have carried out emergency exercises and issued similar guidelines.

Make no mistake, a preemptive strike on North Korea will set off a global chain of events propelling the world’s superpowers into world war. The Chinese government has previously said that they reject military intervention, but in the event that the U.S. launches a preemptive strike on North Korea – the Chinese military WILL intervene in defense of the North.

Sadly, this entire scenario has been escalated to this point by those who claim to want peace.

For decades, the insane dictatorship that is North Korea has been making hollow threats — none of which they have ever carried out since the Korean war. Since the Korean War, North and South Korea have engaged in incursions and sabotage within each other’s respective countries, but North Korea has never attacked anyone else since.

As Ron Paul pointed out, the fact that North Korea is not an actual threat to the US is of no interest to those buying into the fear mongering war propaganda. Even the non-interventionists who supported Trump are buying into the sheer apocalyptic lunacy that would be a war with North Korea.

“The propagandists are winning,” said Paul. Indeed they are and now, we have evidence that their warmongering insanity could have dire repercussions for the entire planet.

Until these hard truths are faced by the citizens of this country, we will continue to aggressively antagonize and provoke other countries like North Korea until one of these psychopaths — with their finger on the ‘red button’ — kicks off a global nuclear holocaust.

Being antiwar is not some cowardly stance by peaceniks and hippies, it is the only way to ensure humanity’s future on this planet.

Peace is not only the goal, but it is the only effective path by which that goal is reached.

As Neocons March us into Nuclear war….
Remember, "the only winning move is not to play." pic.twitter.com/dThLANIohI

Matt Agorist
Matt Agorist is an honorably discharged veteran of the USMC and former intelligence operator directly tasked by the NSA. This prior experience gives him unique insight into the world of government corruption and the American police state. Agorist has been an independent journalist for over a decade and has been featured on mainstream networks around the world. Agorist is also the Editor at Large at the Free Thought Project. Follow @MattAgorist on Twitter, Steemit, and now on Facebook.