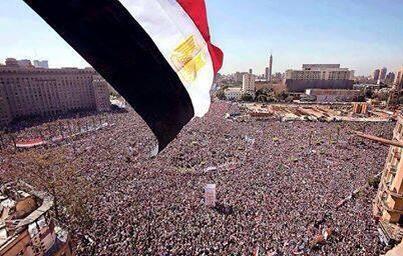 More than 32 Million Egyptians are demanding Morsi to step down. Morsi was democratically elected president, but he granted himself more power.  According to Egyptian Media, the army killed more than 20 peaceful protesters nearby Cairo university.

President Morsi refuses to step down!

Incredible Footage of the Largest Protest in Mankind’s History!!

CAIRO — As huge crowds of pro- and anti-government protesters massed in the streets of Cairo Wednesday afternoon and the army deployed armored vehicles, a top adviser to embattled Egyptian President Mohamed Morsi declared that a military coup was underway and warned that “considerable bloodshed” could ensue.More than 32 Millition Egyptians are demanding Morsi to step down. Mubarak was democratically elected president, but he granted himself more power.

Dozens of armored vehicles were deployed at eastern Cairo’s Rabaa Adawiya Mosque and outside Cairo University, where hundreds of thousands of Morsi supporters gathered. They and the Morsi opponents were waiting to see whether Egypt’s powerful army would take action, as promised, once its deadline for Morsi and his opponents to forge a political agreement had expired.  MORE HERE