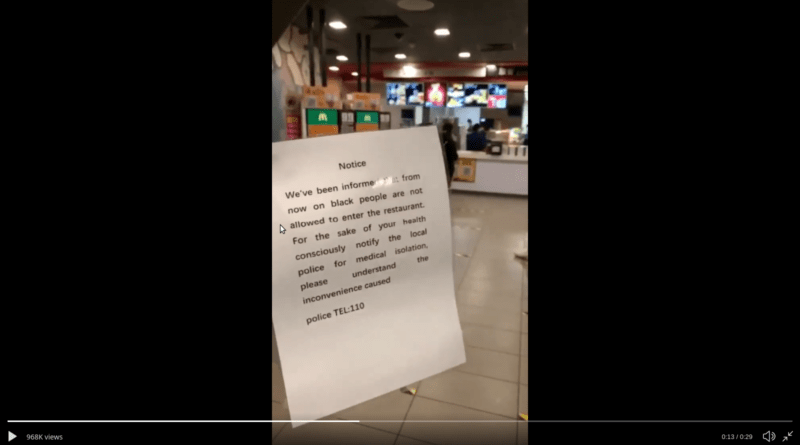 The city of Guangzhou in China is one that has the highest black population in the country, and is often visited by traders and travellers from across the African continent. However, this hasn’t stopped a spike in racism against black people in the region, incited by the coronavirus outbreak. A sign was spotted outside a McDonald’s restaurant in the region, declaring that they had been “informed that from now on black people are not allowed to enter the restaurant.”

The sign was tweeted out by Black Livity China, an account that documents the “360° of Black experiences both in China and in relation to China for the benefit of our global community.” More @ Source

Again, for those who still doubt that Black people and particularly #AfricansinChina are being targeted we feel it is our duty to share this. A sign at a @McDonalds restaurant seems to make this perfectly clear pic.twitter.com/FaveKrdQHi

The McDonald’s Corporation swiftly responded when the sign was brought to attention.

“As a brand, as a company and as more than 2.2 million people serving nearly 120 countries around the world, this is not representative of our inclusive values,” they said in a statement. “Immediately upon learning of an unauthorized communication to our guests at a restaurant in Guangzhou, we immediately removed the communication and temporarily closed the restaurant.”