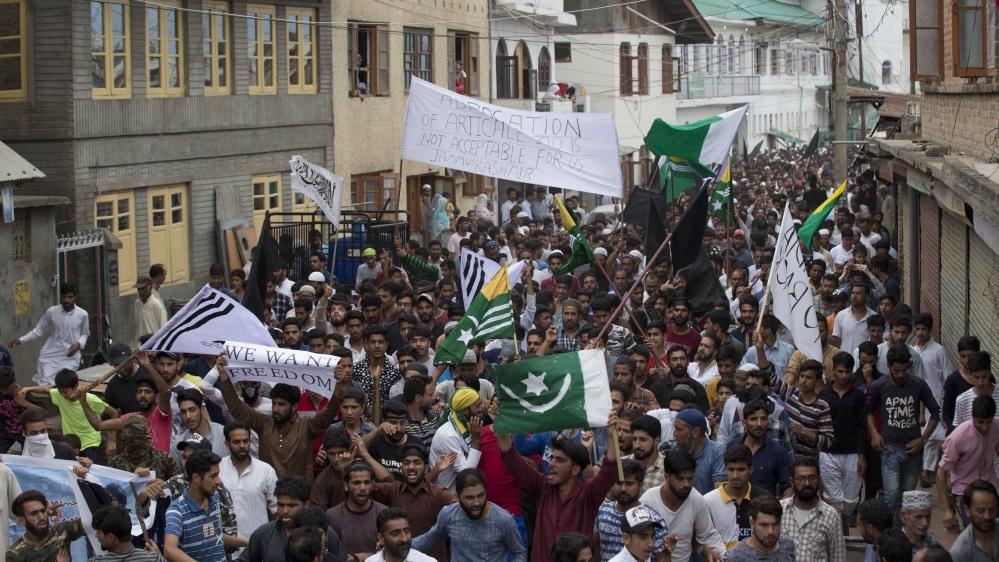 “We were just marching peacefully after prayers,” her father said. “Then they started shooting at us.”

Despite Indian-administered Kashmir now on a complete communications blackout and security lockdown after its autonomy was revoked last Monday, videos of major protests and clashes with Indian troops in the Muslim stronghold have begun to emerge.

One video from the Jammu and Kashmir’s (J&K) largest city and capital of Srinagar appears to show live gun fire used by security forces to disperse demonstrators, at the end of a protest which western media described as initially involving tens of thousands.

Amid troops dispersing tear gas, automatic fire can also be heard in some of the early videos to come out.

Though it’s unclear whether gunfire clearly heard in the video could involve riot control measures like rubber bullets, pellets, or possibly Indian troops discharging their weapons in the air, The New York Times this weekend reported multiple wounded by gunshot following the weekend protests.

Interestingly, consistent with the information and communications blackout, Indian authorities overseeing the tens of thousands of Indian military which surged into J&K over the past week have denied the protests ever happened.

This as The Guardian reports there’s been a slight ease in curfew and travel restrictions places on Srinagar. Landlines, cell phones, and the internet remain blocked, however. This means little information, including of protests in the restive region, has come out.

A Times report cited eyewitnesses to say Indian troops are in some instances suppressing mass demonstrations through live fire:

Afshana Farooq, a 14-year-old who was nearly trampled in a stampede when Indian forces opened fire on demonstrators, in a hospital in Srinagar, Kashmir, on Friday. “We were just marching peacefully after prayers,” her father said. “Then they started shooting at us.”

An Al Jazeera correspondent currently on the ground in the region also reported that, “Despite the unprecedented security lockdown, thousands of people demonstrated in Srinagar and were met with live fire, tear gas and rubber-coated steel bullets,” according to an account of prior Friday protests in Srinagar.

As we reported previously, local reports are describing a total communications blackout that’s so bad many don’t even know New Delhi revoked the region’s political autonomy early this week. The region has essentially been cut off from the rest of the country and the outside world, with a security blockade and checkpoints also set up by the military, and schools shuttered and all public assemblies banned.