In the light of the truck attack in New York, Al Bawaba News asked Imam Tawhidi if the Mayor of New York should be held in some part responsible for the threat level in the city.According to his 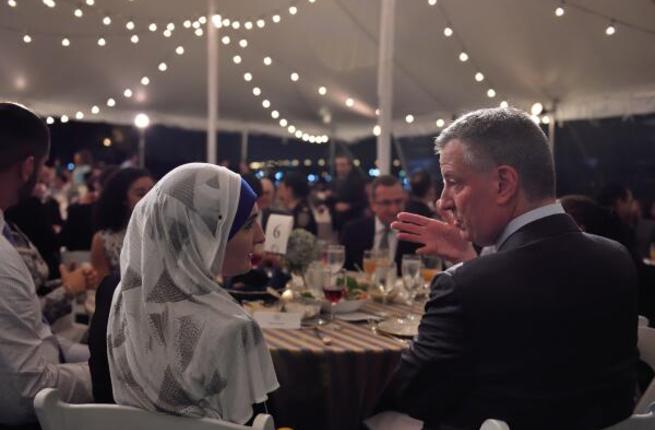 “Iftar” At Gracie Mansion With Mayor De Blasio, 2014. / Courtesy
In the light of the truck attack in New York, Al Bawaba News asked Imam Tawhidi if the Mayor of New York should be held in some part responsible for the threat level in the city.

According to his Twitter page, the Australian Imam warned Mayor De Blasio of “extremist (Wahabist) fundamental teachings” in a letter dated February 2016.

Mohammad Tawhidi is a public figure of Iraqi origin, born in Iran but living in Australia. He is Muslim but it has been claimed that some of his ideas are anti-Muslim, in example that halal certification threatens the Australian way of life and that Palestine is a Jewish land.

Linda Sarsour is a left-wing social and political commentator whose comments on Islamic identity, gender and race have been accused by some of serving to drive a wedge between Muslim communities and Middle America.

In July 2016, Sarsour was invited to give an address to the Islamic Society of North America (ISNA) which typified American citizens that voted for Donald Trump as “fascists”, “white supremists” and “Islamophobes.”

“I hope that […] when we stand up to those who oppress our communities that Allah accepts from us that as a form of jihad. That we are struggling against tyrants and rulers not only abroad in the Middle East or in the other side of the world, but here in these United States of America where you have fascists and white supremacists and Islamophobes reigning in the White House.”

Her comments were later taken out of context by right-wing social media outlets, which accused her of calling for a violent “jihad” in America.

In an email to Al Bawaba, Imam Tawhidi suggested that the support for Sarsour from the American Left could backfire:

“I believe that there will come a time where American government officials will regret dealing with Linda Sarsour. Her loyalty belongs to her Islamic Authorities, not the USA.”