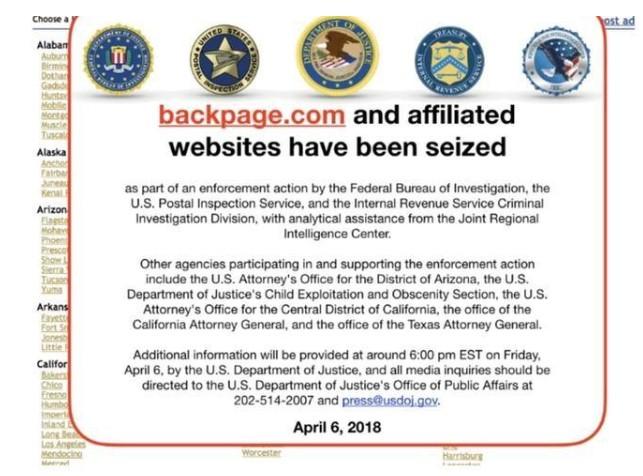 “I don’t think we had any understanding of how dominant Backpage was at the time. They were a full monopoly on (internet-based) commercial sex in the United States.”

In the year after US authorities shut down sex ad website Backpage.com, the online prostitution market has scattered across the internet with several players still trying to  -ahem, literally – fill the void.

The breakdown of this quasi monopoly, and the resulting scattering of websites, means that the landmark package of sex trafficking laws passed by Congress, known collectively as SESTA-FOSTA, has made it difficult for these types of websites to operate according to a Reuters report. Sex trafficking and prostitution has now, instead, drifted towards so-called hobby boards and “sugar daddy” pages. Rob Spectre, CEO of Childsafe.AI said that ad demand levels remain low as sex trafficking has become more difficult and less profitable on the Internet.

“Basically the ads are back but the buyers aren’t,” he said.

Recent looks at sex web ad sites showed men complaining about the difficulty in finding “legitimate” providers, with some openly lamenting the absence of Backpage.com. That website was seized almost a year ago to the day on April 6, 2018 in a United States Justice Department sex trafficking and child prostitution investigation. Seven people, including the founders of the website, were charged in a 93 count indictment with facilitating prostitution, money laundering and fraud.

Days after the seizure, President Trump signed the SESTA-FOSTA laws, which amended the “safe harbors” provisions of the Communications Decency Act that had protected websites from criminal liability over third-party or user generated content.

Naturally, advocates for sex workers have criticized the set of laws, arguing that taking down Backpage would drive prostitution even further underground or into the streets. Free-speech activists also said that the laws burden website owners with policing content. The study showed that the website’s closure resulted in demand for prostitutes dropping 67% and search volume plunging 90% immediately after the site went off-line. While many states have tried to “fill the void” left by Backpage, they each only draw about 5% to 8% of the unique visitors Backpage was earning at its height in 2016.

Senator Claire McCaskill had previously described Backpage as “a $600 million company built on selling sex and, importantly, on selling sex with children.”

Spectre said: “I don’t think we had any understanding of how dominant Backpage was at the time. They were a full monopoly on (internet-based) commercial sex in the United States. The competition is so fierce, and it’s really dirty, to the degree that I’m not sure there’s ever going to be a single dominant player ever again.”

A sampling of current ads shows that nearly 3/4 of them are duplicates, spam or scams. Meanwhile, website operators struggle to process credit card transactions or obtain outside financing. The costs associated with running these illicit businesses are on the rise, causing more and more owners to abandon them.

Spectre continued: “We’re seeing a greater number of victims saying they have been abandoned by their trafficker and traffickers saying, ‘I’m getting out of the game, I’m going back to selling drugs.'”

Others have turned to Twitter or Instagram using the #backpage hashtag to signal their intentions. There has also been a shift towards hobby boards, where clients of prostitutes share graphic reviews of women and sugar daddy pages, that attempt to emulate dating sites.

Anaheim Police Sergeant Juan Reveles of the Orange County Human Trafficking Task Force in Southern California said the closure of Backpage represented a double edged sword for law-enforcement. He stated: “If we spend the time and effort to shut down one website, another one will pop up, and our resources are finite.”