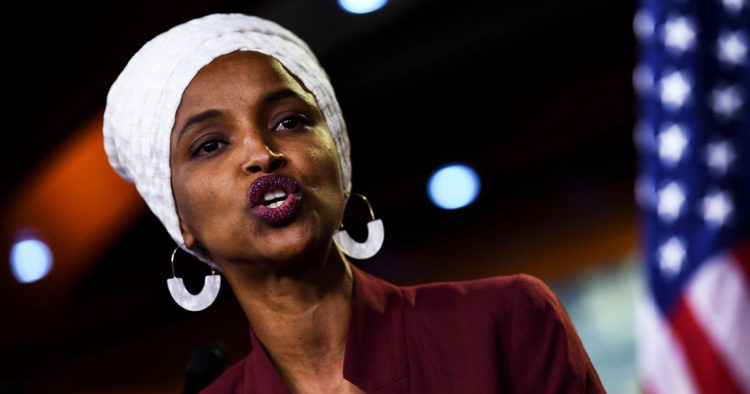 Representative Ilhan Omar (D-MN) said she resented anyone claiming President Donald Trump was not a racist on Thursday’s broadcast of MSNBC’s “Live.” In a video clip from lastnight’s Minnesota rally, Trump said, “What is going on with Omar? I have been reading the reports for two years about how corrupt and crooked she is.

Representative Ilhan Omar (D-MN) said she resented anyone claiming President Donald Trump was not a racist on Thursday’s broadcast of MSNBC’s “Live.”

In a video clip from lastnight’s Minnesota rally, Trump said, “What is going on with Omar? I have been reading the reports for two years about how corrupt and crooked she is. Then she tells us how to run our country. Can you believe it? How the hell did Minnesota elect her?”

Omar said, “I mean this man is a white supremacist, so no surprise that he has ideas of feeling that Somalis are worthless and having a hard time accepting the fact that, you know, a district that is 65% white can elect Somali refugee. But the truth is, 78% of them voted for me to come to Congress. And not only are Minnesotans welcoming of refugees, they have sent one to Washington to represent them. We are very clear that in Minnesota, we are greater than hate. That is why he didn’t win Minnesota in 2016 and why he won’t it this year.”

She continued, “It’s completely terrifying truly, to have the president not only condemn white supremacy but to tell them to stand back and stand by. Many people understand what the implications are when you have a president who is supposed to care for and protect the citizens of this country really speak to people who are listed as a hate group, people who have been responsible for the majority of the domestic terrorist threats that our country has faced, to stand down. And they have responded accordingly and said the president has told us to stand down because he’s going to call upon us to beat up people and for my constituents and for constituents across the country, people are terrified. Our country really is at a crossroads where people have to make a decision on a direction we want to go. And that direction has to be one that isn’t the vision of the America that the president sees, but a vision of what America should be and the kind of America we want to live in.”

She added, “You know, and the president mocked his wife for wanting to go to Africa. He’s called African nations, you know shit-holes, this is not someone who has really hidden his hate for me and everything that I represent. I resent anyone who says this president is not racist. I resent anyone who says, you know this president is not a white supremacist because for the last four years and in his history, this president has told us who he is and we can no longer —we can no longer turn a blind eye to that. He’s destroying our country, and we have to make sure we defeat him.”

She concluded, “He clearly, you know, loves to create division, chaos, and that’s, you know, how he distracts people from his inability to lead. His inability to show any humanity and care for the 200,000 Americans who have lost their lives to COVID-19, including my own father. The economic crisis that our country is currently in and the weakness of, you know, his messaging to the American people. What we have on the Democratic side is enthusiasm for the first time to join arms, to get rid of this fascist in the White House.”

Source: Ilhan Omar Goes After President Trump, After Thousands Chant “Lock Her Up” at Rally