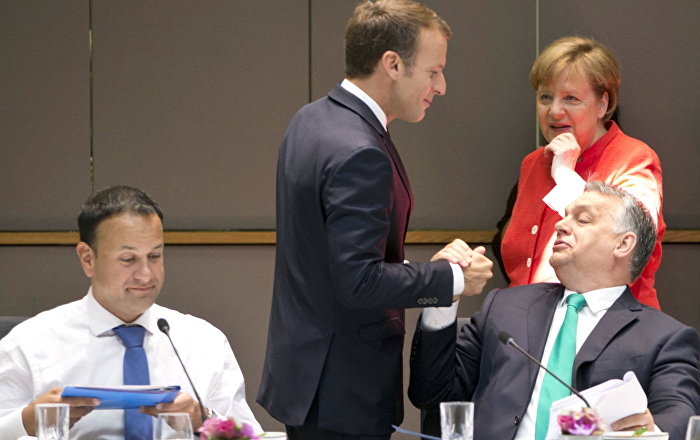 France’s Emmanuel Macron and Hungary’s Viktor Orban have engaged in a political war of words for months amid the French president’s threats to sanction EU members which turn away migrants and the Hungarian prime minister’s hardline position on the migrant question.

France’s Emmanuel Macron and Hungary’s Viktor Orban have engaged in a political war of words for months amid the French president’s threats to sanction EU members which turn away migrants and the Hungarian prime minister’s hardline position on the migrant question.

Hungarian Prime Minister Viktor Orban has said that he would welcome anti-immigration parties gaining a majority at the upcoming elections to the European Parliament in May.

In a news conference on Thursday, Orban described French President Emmanuel Macron as the leader of pro-immigration forces in Europe, and vowed to fight him and what he stood for.

“There is no denying that Emmanuel Macron is an important figure, moreover, the leader of the pro-immigration forces,” he said. “It’s nothing personal, but a matter of our countries’ future. If what he wants with regard to migration materialises in Europe, that would be bad for Hungary. Therefore, I must fight him,” Orban said.

According to the prime minister, a victory by anti-immigration forces at the elections to the European Parliament would also have the prospects of changes in the EU’s executive — the European Commission. Later, Orban said, national elections in individual EU states could change the makeup of the European Council, thus leading to continent-wide shift on the migration issue.

Commenting on the recently announced Polish-Italian agreement on strenthening the EU’s external border, Orban said he could only welcome the move.

In addition, the prime minister accused Germany of disrespecting Hungarians’ position on the migrant issue, and said that he feels constant pressure from Berlin to let migrants in.

Macron has been embroiled in a conflict with populist leaders in Hungary, Italy, the Czech Republic, Slovakia, Poland and Austria over his position on the migrant issue. Last June, the French president threatened to sanction EU member states which refuse migrants with proven asylum status, saying Paris could not accept a situation where “countries that benefit massively from EU solidarity” give in to “national self-interest when it comes to the issue of migrants.”

Earlier, Prime Minister Orban said the Visegrad Group favoured the idea of screening centres for would-be migrants outside of the EU, proposing establishing such centres in Africa. The EU’s migration commissioner rejected the idea, calling it a “Guantanamo Bay for migrants” which was “against our European values.”

“Stop your policy of open borders in Europe, we need our youth here” urge African leaders

Hungary has yet again “come under fire from the international liberal mainstream”, Peter Szijjarto, the foreign minister, said on Tuesday on Facebook.