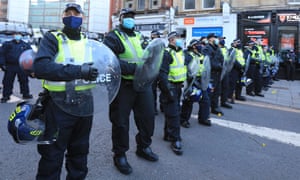 Violence erupted between protesters and police in Bristol again on Friday night as more than a thousand demonstrators gathered for a third “kill the bill” demonstration within a week.

Dozens of people were involved in skirmishes with police as officers wearing helmets and holding shields moved towards the crowd after 10 o’clock, following orders for the crowd to disperse under a “breach of Covid legislation”.

A few protesters threw bottles in response and chanted: “Shame on you.” Police used horses and vans to drive crowds back into the city centre, and people were treated for the effects of pepper spray.

Avon and Somerset police said arrests were made. “Projectiles, including eggs and glass bottles, are being thrown at officers,” the force tweeted. It did not specify how many arrests had been made.

More than a thousand people gathered in the city centre earlier in the evening to protest against the government’s police, crime, sentencing and courts Bill.

Hundreds sat down in the street near Bridewell police station, the focus of rioting on Sunday evening and Monday morning.