There was excitement in the online UFO community earlier this week after UFO hunters announced that images captured by amateur astronomers show a giant alien structure that entered our solar system very recently.

The giant alien structure, which was spotted approaching Jupiter’s moon Europa, resembles an interstellar mothership or an intergalactic UFO armada, according to UFO hunters.

Online UFO hunters claim that the images captured recently by two amateur astronomers working independently suggest that a major expeditionary effort mounted by a technologically advanced spacefaring alien race from a distant planetary system may have arrived in our solar system.

The alien UFO mega structure, believed to be either a giant alien mothership or a fleet of UFOs, was allegedly spotted exploring our section of the galaxy near Jupiter’s moon Europa. The evidence, according to YouTube UFO hunters Secureteam10, comes from a series of imagescaptured by Louis Read, an experienced amateur sky watcher from the city of Bristol in the UK.

The images, uploaded to YouTube on February 18, 2016, by Secureteam10, allegedly show a massive artificial structure approaching Europa, one of planet Jupiter’s 67 moons and the sixth largest moon in our solar system, which was discovered by Galileo Galilei in 1610.

The amateur astronomer captured the incredible images using a Canon 650D camera with a 7D-300mm telescopic lens mounted on a tripod in his private backyard garden in Bristol, UK.

“We’ve just received a new image of the object,
near Jupiter by a second source.” 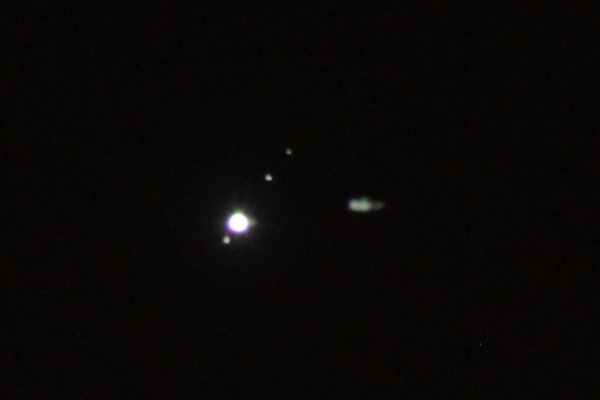 Same object spotted near Jupiter from different source who just sent in this image, along with the original. pic.twitter.com/bjEKKXtIhK

Louis Read was so astonished when he spotted the unusual structure that he decided to send the images to Secureteam10 for a second opinion.

After Secureteam10 received the images and conducted investigations, they concluded that the mysterious structure approaching giant planet Jupiter and its moon system was clearly an anomaly.

The UFO researchers consulted Solar System Scope, an online 3D simulation of our solar system in real time, and confirmed that the object was a foreign body, or more precisely, a massive artificial structure that entered our solar system only recently.

UFO researchers also suggested that the artificial structure was either a single massive alien UFO mothership or a UFO fleet exploring our section of the galaxy.

Secureteam10 believes that amateur astronomers may have captured on camera proof of alien visitors to our solar system.

And going solely by the evidence of research conducted in recent years by Secureteam10, alien visitors to our solar system have a fascination with planet Jupiter and its satellites, especially Europa.

Recently, UFO researchers reported spotting a massive blue UFO in the vicinity of Jupiter and its moon (see YouTube below).

And not only alien explorers are fascinated with the icy world of Europa. Europa is also of special interest to NASA scientists.

Scientists believe that Europa’s icy world, with a tenuous atmosphere composed mostly of life-supporting oxygen, has an icy subterranean ocean that could support extraterrestrial life.

Based on suspicions that Europa’s icy oceans may contain alien life forms, the European Space Agency (ESA) has plans for a Jupiter Icy Moon Explorer (JUICE) mission scheduled to launch in 2022. It is hoped that humans would encounter the first examples of known extraterrestrial life on Europa.

UFO hunters claim that the apparent fascination of alien visitors to our solar system with Europa could be due to the presence of life on it. Some UFO hunters believe that alien visitors from other star systems may have established a base in Europa’s icy underwater world.