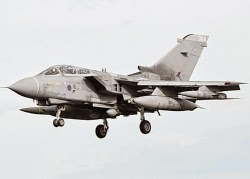 Europe’s largest military exercise is gearing up to take place off the coast of Scotland from this weekend, with aircraft already arriving at RAF Lossiemouth in preparation.
Joint Warrior is a multi-national exercise, which incorporates the Royal Navy, Army and Royal Air Force.The exercise begins tomorrow (Saturday) and will engage more than 22 warships and submarines, 52 fixed wing aircraft, and a total of nearly 3,500 personnel from the various participating nations.

Ships, submarines, aircraft and ground troops from the UK, US and other allies will be taking part, battling each other at sea, in the air and on land in an area which stretches from the Irish Sea, north to Cape Wrath and east to the Moray Firth.According to the RAF, Exercise Joint Warrior represents “a valuable opportunity” to demonstrate the range of capabilities available for contingency operations and provides excellent training which tests the high readiness capabilities of the Armed Forces.
The massive exercise is planned and co-ordinated through the Joint Tactical Exercise Planning Staff, based at Joint Headquarters Northwood.