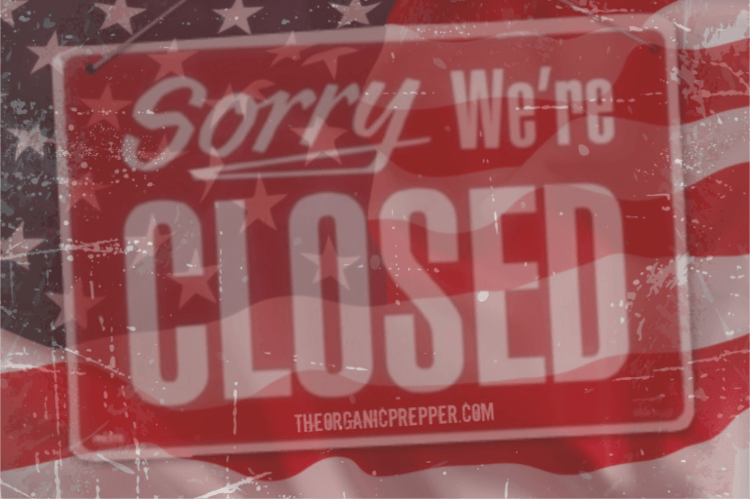 “It is very important for people to understand that this is an early payment. You are not going to get more money later,… This is you getting your February allotment for Food Stamps today… don’t blow your money.”

Authored by Daisy Luther via The Organic Prepper blog,

As I’ve written before, the government shutdown is a perfect demonstration of ourpoliticians participating in partisan showmanship, with poor people as the victims of their theater. As individual states desperately attempt to take care of the people depending on them by sending out food stamp benefits early, the theater in Washington DC continues, completely unconcerned about the havoc being wrought.

Regardless of your thoughts about people who are on government assistance, it’s incontrovertible that people are seeing the rug yanked out from under their feet quite suddenly. Here are some numbers:

That’s a whole lot of Americans who are dealing bigtime stress right now.

A number of states are issuing food stamp benefits early due to the government shutdown. They’re doing this over concern that if the shutdown continues, they won’t be able to issue the payments in February.

But the early payment comes with a sobering warning. A press relief from the state of Michigan said:

For food assistance clients, Michigan will begin issuing February benefits on Saturday, Jan. 19. Clients who don’t receive their benefits on that date should receive the funds the following week. That means the 1.2 million Michigan residents who receive food assistance will have benefits to feed their families in February even if the partial federal government shutdown continues.

The early food assistance benefits are not additional benefits and there will be no food assistance payments in February. MDHHS strongly encourages families to budget the funds they receive in January so they can meet their food needs through the entire month of February. (source)

Another warning, more bluntly worded, came from an official in Pennsylvania.

Carmen Rodriguez, a Camden County Freeholder and Liaison to the Department of Health and Human Services, has a warning for anyone who uses the government’s Supplemental Nutrition Assistance Program, or SNAP. She says don’t blow through the money.

“It is very important for people to understand that this is an early payment. You are not going to get more money later,” Rodriguez said.

“This is you getting your February allotment for Food Stamps today.” (source)

So, to be perfectly clear, many people who receive food assistance are getting an early payment that must see them through until March, at which time officials hope the shutdown will have ended and things will go back to normal. That’s a 6-week time period that people will need to cover with a payment that really isn’t that big. (If you’re curious how much money people are getting on food benefits, I found this calculator. )

Read this article for tips on buying food to get you through an extended period of tough times.

About the saddest thing I’ve seen so far regarding the shutdown is the fact that school lunch programs are now rationing out food to the kids. This is a big problem for some children whose only meal of the day comes from the school cafeteria. 29.7 million children eat meals that are funded by the National School Lunch Program, which is funded by the USDA.

Add to this the fact that even more kids now qualify for free lunches because their parents are furloughed from government jobs.

A school district in North Carolina took to Facebook to announce that their lunch program was now conserving food through “minimum levels.”

Due to the Federal Government Shutdown, lunch menus in Vance County Schools have been revised to a minimum level to conserve food and funding.

Starting the week of January 21, minimum level means: one main dish, bread, two vegetables, one fruit and milk.
No fresh produce will be included, except at elementary schools as part of the Fresh Fruit & Vegetable Program. This program will be decreased to two days each week. (source)

My hope is that if this continues, the schools will set up some kind of way to accept food donations for hungry kids. I know that nobody wants to see children going without at least one balanced meal per day.

What to do if you’re affected

If you are affected by the government shutdown in some way, you’re going to need to make some changes to get through this situation. With the folks in Washington playing an elaborate game of Chicken, there’s no telling how long this sh*tshow will continue.

This article provides detailed information on how to feed your family during difficult times. So if you’re without a paycheck or trying to make your benefits stretch, the advice there may help you a lot. In situations like this, remember that nothing is guaranteed – you have to make anything you buy stretch as far as possible.

There are also instructions in the article on how to get my PDF, The Flat Broke Cookbook: Thrifty Meals & Shopping Tips for Tough Times, for FREE (no questions asked) if you’ve found yourself in a bad situation.

You’re going to have to tighten up your budget, change your eating habits, and be creative to get through this. And hopefully, once it’s over, you’ll have gained some new tools to help you get better prepared for a similar situation in the future. Because regardless of how much the folks in DC say they’re there to help you, they are only there to help themselves. This will happen again and one day, eventually, the benefits and government jobs simply won’t be coming back.

Keep in mind that if this shutdown continues, there will be a trickledown effect. Businesses in Washington, DC are already seeing their revenue drop because no one has the money to eat out or shop. State and county jobs that are federally funded will soon be affected. This is not going to stop with only the people who are federal government employees or who are on welfare.

If you’re in a position to help your neighbors, now would be a great time to do so.

Source: How Sending Out Food Stamp Benefits Early Could Cause Another Problem In A Few Weeks | Zero Hedge