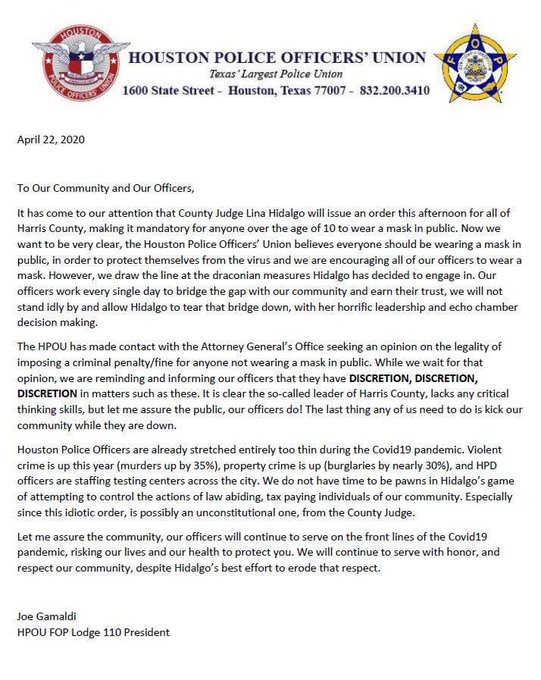 The new rule, ordered by Harris County Judge Lina Hidalgo, requires all adults and children over the age of 10 to cover their noses and mouths when leaving their homes.

Violators could face a harsh penalty, according to the Houston Chronicle, including a fine of up to $1,000 and a maximum of 180 days in jail.

“The citizens of Harris County are working hard together through this pandemic and do not need the added stress and fear of being fined or arrested for failing to wear a mask/face covering they may not have,” David Cuevas, president of the Harris County Deputies Organization, said in a statement.

Joe Gamaldi, president of Houston’s Lodge 110 police union, agreed and said Hidalgo’s order would tear down the “bridge” Houston officers have built with their community.

THIS is how you do it. Good on you, Houston Police Union. pic.twitter.com/lcHDs1rmGz

As a county judge, Hidalgo is not technically part of the judicial branch.

Rather, her position is the equivalent of a chairperson of a county commission.

Gamaldi said he is in contact with the Texas Attorney General’s Office “seeking an opinion on the legality of imposing a criminal penalty/fine for anyone not wearing a mask in public,” as Hidalgo has done.

But in the meantime, Gamaldi urged the officers his union represents to use discretion.

“It is clear the so-called leader of Harris County lacks any critical thinking skills,” Gamaldi said of Hidalgo. “But let me assure the public, our officers do! The last thing any of us need to do is kick our community while they are down.”