Several human skulls with horns protruding from them were discovered in a burial mound at Sayre, Bradford County, Pennsylvania, in the 1880′s. With the exception of the bony projections located about two inches above the eyebrows, the men whom these skeletons belonged to were anatomically normal, although at seven feet tall they were considered to be giants. Burial was believed to have been in the neighborhood of 1200 AD. 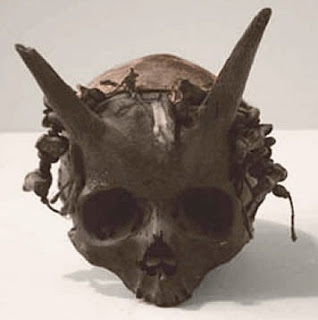 According to the story back in the 1880s, a burial mound was discovered near Sayre at a place called Spanish Hill. But instead of Indian bodies, W.K. Morehead, Dr. G.P. Donehoo and A.B. Skinner of Philadelphia’s American Investigating Museum dug out skeletons. They were reported to be seven feet tall with 4″ horns protruding from their brows. The apparitions of the creatures have also been reportedly seen roaming the area. The bones were supposedly dated back to 1200 AD. They were sent to the Philadelphia museum, where according to legend they disappeared. Some spoilsports claim that the skulls were actually tribal masks and the horns were antlers.

“Shining Ones” is an ambivalent term used for both the Nephilim and their first born. The “Shining Ones” are often depicted with horns on their heads. This was a symbol of wisdom, but also of rulership. This is why shamans, priests, and kings adopted the convention of wearing horns also, especially in the form of the crown, according to writer Mary Sutherland.  This was to primarily indicate that they were descendants of either the Atlanteans or the Lemurians and were endowed with power.

Giant, horned human skeletons unearthed just south of Elmira and Wellsville, NY. A 30 + year old male skeleton was unearthed in a mining area of the El Paso area. Skull had two small horns protruding from the forehead area. Witness of this was Texas Ranger investigating another murder case .

“The name “Chemung” has a well-ascertained meaning in the language of the Senecas, for “Big Horn,” and indicating the fact that in the banks of the river had been found an object resembling an immense horn, or perhaps rather a tusk, belonging to some animal of great size [Wooly Mastodons] who roamed the locality in the ages of the Megatherium or the Mastodon.

This is the article that got the “horned skeletons” story going. The Moorehead expedition occurred in 1916. Strangely – thre have been many accts (including the Jesuits Relations) referring to the Andastes as “devils”.  The valleys of the Susquehanna is made up of 5 counties in Central Pennsylvania – Columbia, Montour, Northumberland, Snyder and Union counties. 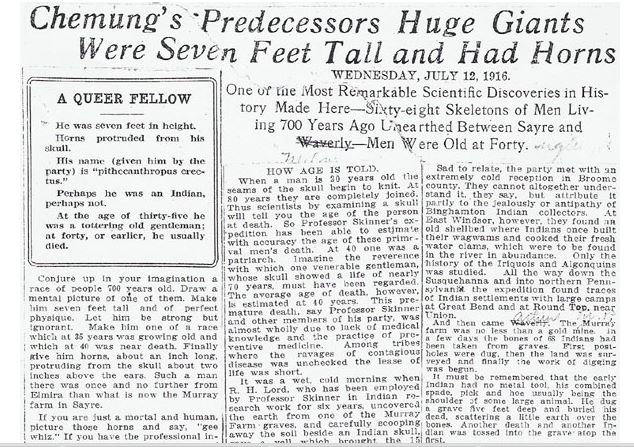 http://www.spanishhill.com/articles/horned.htm
According to Deb Twigg, Executive Director of the Susquehanna River Archaeological Center of Native Indian Studies (SRAC), ” This is the headline from the earliest news article that that she could find. It is from 1916,( as opposed to the 1880′s.) This article goes on to say that this is “One of the Most Remarkable Scientific Discoveries in History Made Here – Sixty Eight Skeletons of Men Living 700 years ago Unearthed between Sayre and Waverly”… “A Queer Fellow: He was seven feet in height. Horns protruded from his skull”…”horns of solid bone which grew straight out from the skull about two inches above the perfectly formed skull and which gave every evidence of having been there since birth.”
http://sracenter.blogspot.com/2008/07/horned-skeleton-story.html 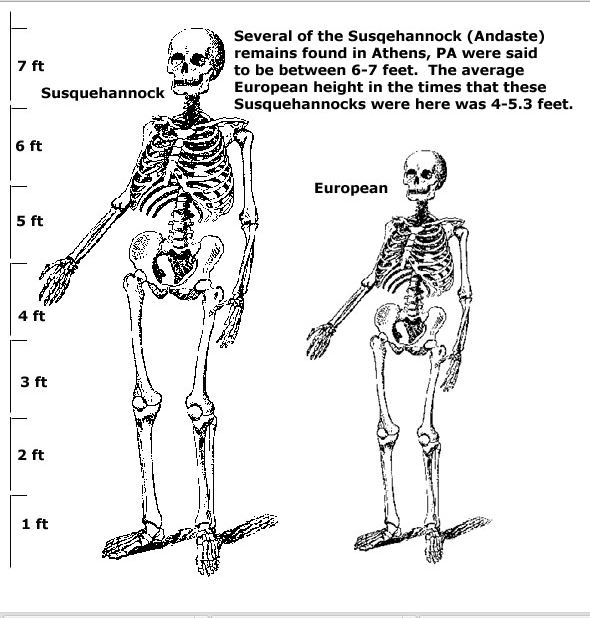 Twigg maintains that the story of the find in the 1880′s was a grocery story booklet. She was given a small grocery store checkout style booklet that had the following on pages 16 & 17: ”It was the late 1880′s. A group of scientists were conducting an expedition through the Bradford County area of Pennsylvania, in the northeastern part of the state near the New York state line.

The varying cultures collectively called Mound Builders were prehistoric inhabitants of North America who, during a 5,000-year period, constructed various styles of earthen mounds for religious and ceremonial, burial, and elite residential purposes. These included the Pre-Columbian cultures of the Archaic period; Woodland period (Adena and Hopewell cultures); and Mississippian period; dating from roughly 3400 BCE to the 16th century CE, and living in regions of the Great Lakes, the Ohio River valley, and the Mississippi River valley and its tributaries. Beginning with the construction of Watson Brake about 3400 BCE in present-day Louisiana, nomadic indigenous peoples started building earthwork mounds in North America nearly 1000 years before the pyramids were constructed in Egypt. Credit: WikipediaSince the 19th century, the prevailing scholarly consensus has been that the mounds were constructed by indigenous peoples of the Americas, early cultures distinctly separate from the historical Native American tribes extant at the time of European colonization of North America. The historical Native Americans were generally not knowledgeable about the civilizations that produced the mounds. Research and study of these cultures and peoples has been based on archaeology and anthropology.
Towanda Daily Review – 1897 – “The Grave of a Giant”

In his book, The Natural and Aboriginal History of Tennessee, author John Haywood describes “very large” bones in stone graves found in Williamson County, Tennessee, in 1821. In White County, Tennessee, an “ancient fortification” contained skeletons of gigantic stature averaging at least 7 feet in length, according to citations at the DiscloseTV forum on giants.

Giant skeletons were found in the mid-1800s near Rutland and Rodman, New York. J.N. DeHart, M.D. found vertebrae “larger than those of the present type” in Wisconsin mounds in 1876. W.H.R. Lykins uncovered skull bones “of great size and thickness” in mounds of Kansas City area in 1877.

George W. Hill, M.D., dug out a skeleton “of unusual size” in a mound of Ashland County, Ohio. In 1879, a nine-foot, eight-inch skeleton was excavated from a mound near Brewersville, Indiana (Indianapolis News, Nov 10, 1975).

A six foot, six inch skeleton was found in a Utah mound. This was at least a foot taller than the average Indian height in the area, and these natives – what few there were of them – were not mound builders.

“A skeleton which is reported to have been of enormous dimensions” was found in a clay coffin, with a sandstone slab containing hieroglyphics, during mound explorations by a Dr Everhart near Zanesville, Ohio. (American Antiquarian, v3, 1880, pg61).

Ten skeletons “of both sexes and of gigantic size” were taken from a mound at Warren, Minnesota, 1883. (St. Paul Pioneer Press, May 23, 1883) A skeleton 7 feet 6 inches long was found in a massive stone structure that was likened to a temple chamber within a mound in Kanawha County, West Virginia, in 1884. (American Antiquarian, v6, 1884 133f. Cyrus Thomas, Report on Mound Explorations of the Bureau of Ethnology, 12th Annual Report, Smithsonian Bureau of Ethnology, 1890-91).

A large mound near Gasterville, Pennsylvania, contained a vault in which was found a skeleton measuring 7 feet 2 inches. Inscriptions were carved on the vault. (American Antiquarian, v7, 1885, 52f).

In 1885, miners discovered the mummified remains of woman measuring 6 feet 8 inches tall holding an infant. The mummies were found in a cave behind a wall of rock in the Yosemite Valley.

A mound near Toledo, Ohio, held 20 skeletons, seated and facing east with jaws and teeth “twice as large as those of present day people,” and besides each was a large bowl with “curiously wrought hieroglyphic figures.” (Chicago Record, Oct. 24, 1895; cited by Ron G. Dobbins, NEARA Journal, v13, fall 1978).

The skeleton of a huge man was uncovered at the Beckley farm, Lake Koronis, Minnesota; while at Moose Island and Pine City, bones of other giants came to light. (St. Paul Globe, Aug. 12, 1896).

In 1911, several red-haired mummies ranging from 6 and a half feet to 8 feet tall were discovered in a cave in Lovelock, Nevada.

In February and June of 1931, large skeletons were found in the Humboldt lake bed near Lovelock, Nevada. The first of these two skeletons found measured 8 1/2 feet tall and appeared to have been wrapped in a gum-covered fabric similar to the Egyptian manner. The second skeleton was almost 10 feet long. (Review – Miner, June 19, 1931).

A 7 foot 7 inch skeleton was reported to have been found on the Friedman ranch, near Lovelock, Nevada, in 1939.(Review – Miner, Sept. 29, 1939) In 1965, a skeleton measuring 8 feet 9 inches was found buried under a rock ledge along the Holly Creek in east-central Kentucky.

Stephen Wagner at About.com also notes some of the ancient giants found in America.  Here are three that he notes in his longer article.
All the Better to Eat You With, My DearIn 1888, seven skeletons, which had been placed in a sitting position, were uncovered from a burial mound near Clearwater, Minnesota. The highly unusual skulls of these beings had double rows of teeth in both the upper and lower jaws. It was also noted that the foreheads were low and sloping, compared to “normal” human skulls, and had distinctly prominent brows.

Copper Man
The December 17, 1891 issue of the respected journal Nature reported the discovery of a giant man buried 14 feet within the center of one of Ohio’s mysterious burial mounds. The enormous man’s arms, jaw, arms, chest and stomach were all clad in copper. Wooden antlers, also covered with copper, rested on either side of his head. His mouth was filled with large pearls, and a pearl-studded necklace of bear teeth hung around his neck. Who this man was, or to which race of people he belonged, is unknown.

The Mica Giant
In 1879, a burial mound in Brewersville, Indiana yielded another giant skeleton, according to the November, 1975 edition of The Indianapolis News. This one reached 9 feet 8 inches tall! It wore a necklace of mica stone, and a crude human effigy of clay was found standing at his feet. The giant skeleton was examined by scientists from Indiana and New York, and it remained in the possession of Mr. Robinson, who owned the land on which the mound stood. Unfortunately, the curious bones were washed away in a flood in 1937.

Read more: http://www.disclose.tv/forum/the-giants-lost-in-history-t59036-10.html#ixzz2HZdQY4eP
Use the following links to read more about the giant skeletons that were found: