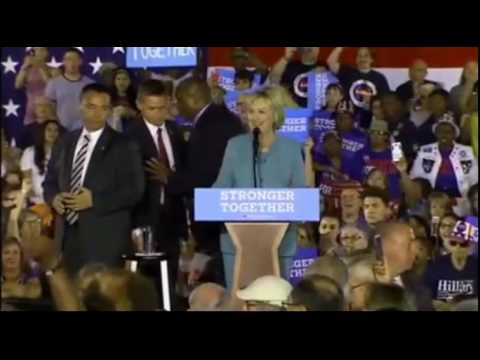 her medic specifically pushes the secret service agents AWAY knowing they will trigger her seizures by being so close to her that way.
That guy really is something different than secret service.
He also ran to her the minute there was a noise that might trigger a seizure and he clearly asked her “are you ok?” That is not aquestion you ask if its a security threat. Its only a question you ask if someone has a medical condition.

Hillary Clinton Gets Flustered by Protesters at Rally – August 4, 2016

“Notice the handler grabs her wrist and drops it off the podium, that’s an instant hypnotic induction”
Look how the same guy reacts to a situation that startles Hillary, he is ready to dose her at any moment. Then look how he speaks to her, telling her what to do.

Notice how she immediately reacts when he says keep talking. Clearly this guy has a major role with her. Hillary doesn’t like taking orders from people but she reacted immediately to this guys orders.

If anyone still thinks this is a Secret Service agent, they would not have to wear a lanyard or ID tag like he is wearing. This is a civilian who needed special access.

From the Diazepam wiki page: “Adverse effects of benzodiazepines such as diazepam include anterograde amnesia and confusion (especially pronounced in higher doses) and sedation. The elderly are more prone to adverse effects of diazepam, such as confusion, amnesia, ataxia, and hangover effects, as well as falls.”

From a Comentator:
“As someone who owns this exact same model pen because a family member who has a history of convulsions is often nearby, this discovery raises a legitimate concern on whether or not Killary is “fit for presidency.”

Sadly, the media will never report on this and/or if they do, will try to minimize it. Just like they did when she had a stroke.”