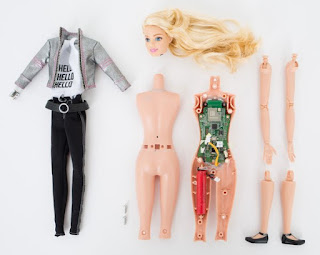 Mattel, with the help of San Francisco startup ToyTalk, recently released an Internet of Things (IoT) enabled Barbie doll that children can talk to, responding with over “8,000 lines of recorded content.” To produce all of this content it relies on a constant connection to the internet.

Utilizing a user’s home Wi-Fi network, it sends audio recordings to ToyTalk’s servers for analysis and to generate a response. Every audio clip is stored in the cloud where parents can later review and share themonline. This data being mined and used for marketing purposes is a big privacy concern, but so is the possibility of this data or the device itself being susceptible to hackers. However, Mattel assures users that they are “committed to safety and security”and that the doll “conforms to applicable government standards”. The release of the doll has already stirred up some controversy on the internet, but until now it has all been speculation.

As security researchers we thought it prudent to explore whether or not Mattel was able to achieve the level of privacy and security that they claim…. http://www.somersetrecon.com