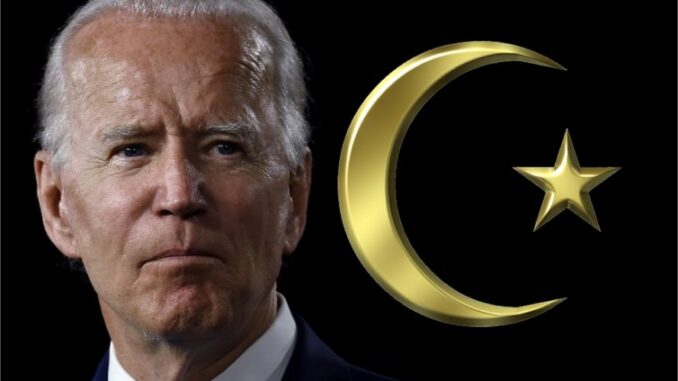 Has Joe Biden Converted to Islam? Biden invoked “Inshallah” during the debate, which is an Islamic/Arabic word meaning “If Allah Wills It”.

Has the former Vice President, Joe Biden, converted to Islam?

Joe Biden has always alleged that his faith is Catholicism, yet recently he has been pushing Islam onto the people of this country.

The Democratic candidate for President of the United States recently spoke at a HAMAS/EMGAGE conference and told the audience that he wants to see more Islam taught in U.S. schools.

Joe Biden also tells them that Islam is a great “Confessional Faith” and that Muslim Votes Matter.

He has certainly jumped into their beliefs with both feet, hasn’t he?

It is not surprising, then, to see him invoke “Allah” during the recently debate against President Trump.

Biden invoked “Inshallah” during the debate, which is an Islamic/Arabic word meaning “If Allah Wills It”. The term is mentioned in the Quran (37:102) and is used to fulfill a Quranic command of speaking on future events. The phrase is commonly used by Muslims.

Candidate Biden has hired Farooq Mitha of Emgage to be his “National Islamic Advisor”, a role Mitha held for Hillary Clinton during her campaign.

It is concerning to hear a candidate for this country’s highest office promote the beliefs of this Not-So-Peaceful Political Ideology. However, since he seems to be running away from his own Catholicism, as is evidence by him being denied Communion over his promoting abortion, it does not seem to be a stretch to wonder if he is converting to the Islamic beliefs.

Hank Hanegraaff, self-described as the “Bible Answer Man, is an American Christian author and radio talk-show host. In the following video, he gives his response to Biden’s speech

Should US schools teach more about Islam? Is the Islamic faith one of the great confessional faiths? In this video, Hank Hanegraaff, host of the Bible Answer Man broadcast, critiques erroneous statements about Islam made by Joe Biden at the Million Muslim Votes Summit.